Raise the red lantern, for it’s nearly time to welcome in the Chinese New Year. February 19 will see the dawn of the Year of the Sheep, an animal known in China for being calm and kind, qualities attributed to people born under this sign. At London restaurant HKK, part of the Hakkasan stable, Head Chef Tong Chee Hwee has masterminded a tasting menu to welcome in the New Year; ten courses that transport the diner across eight regions of the land of the Great Wall, creating a culinary tour of a variety of Chinese cuisines, no passport required.

Recently I received an e-mail that cracked open like a fortune cookie filled with promise: might I be interested in reviewing Chef Tong’s New Year menu? As the Chinese might say, yao, xie xie, YES, thank you, I very much would. And so, with my wine advisor (read: husband) on one arm, I set off to Broadgate in the City of London to eat my way through China without leaving the country.

For anyone familiar with Hakkasan’s Hanway Street flagship restaurant or Bruton Street sister, the décor at HKK couldn’t be further from the chic Shanghai Bund feel of its siblings. At first glance this interior is devoid of anything that might indicate an Asiatic influence. Diaphanous curtains shroud the main dining room in silver, the tables following the perimeter, with a large serving island at the nucleus of the space. Until the menus arrived we could have been dining under just about any flag, such is the simplicity of the interior. 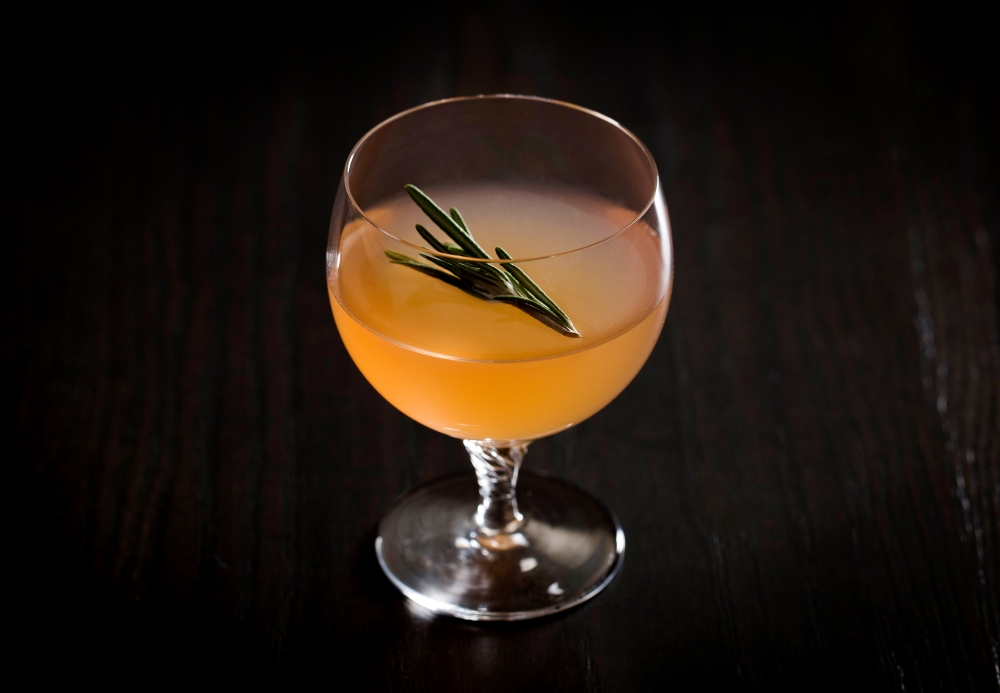 The menus for this jaunt about China came in a red wrapper, emblazoned with a golden sheep worthy of Jason and accompanied by a colourful hand-painted version to keep, the work of artist, Louise Morgan.

The first treat to manifest was a cocktail named the Yáng Walker, a delightful few fruity gulps of Johnny Walker combined with plum wine, grapefruit and lemon juices and a good splash of Dah Chu Chiew, a type of Chinese grain-based spirit, Baijiu, which has existed now for over five millennia. Thankfully, it arrived in a small measure because this was a cocktail that in quantity could be most dangerous indeed. Exotic, strong, tropical, delicious.

The appetiser appeared with a glass of Stepp Pinot Noir from Pfalz in Germany, our first pairing wine. Our taste buds would be whet by small cubes of diced pork set in a Chinese wine jelly, arranged with fragrant leaves, tiny mounds of grated ginger and slivers of radish. I confess I’m not a huge fan of aspics and savoury jellies, but I will say that the pork was well-flavoured and the garnish so fresh and hot and cool in small but equal parts that, for me, it was the garnish that became the star of this dish. The tour had begun; we’d just passed through the Jiangsu Province and experienced Su cuisine, where meat is often infused with wine, creating a sweet result. 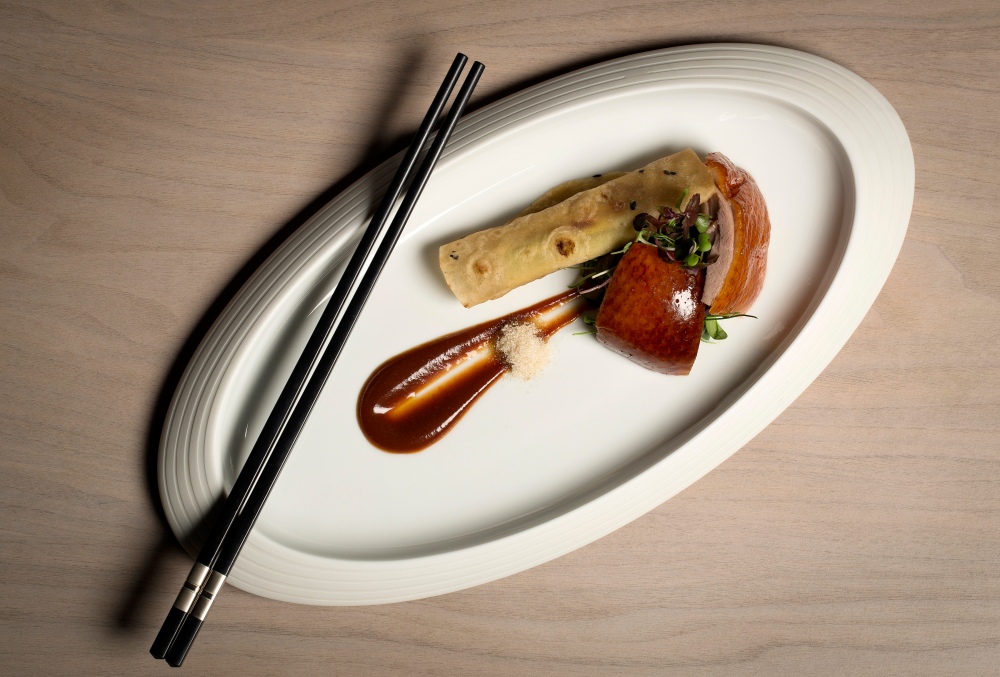 No Chinese banquet would be complete without the presence of Peking duck. Out came the chef in his whites, carrying a duck that looked like a well-oiled, long-term resident of Florida, such was the perfect bronzage. We were invited to watch the chef carve the bird at the serving island. There, we learned that the duck had been marinated in five spice and vinegar before a lazy hanging and roasting over cherry wood. Our plates were smeared with hoi sin sauce and a wedge of breast set upon it, followed by a triangle of crispy skin and a small pancake, prepared for us in the traditional manner with cucumber and spring onion, duck and a touch more hoisin. Back at the table, this duck was a smoky-sweet taste bomb of tender meat, which, although a case of gilding the lily, we were then encouraged to dip into a little bit of sugar and the plum sauce on the plate. Concerning the crispy skin – my goodness, it was so scoffable that HKK should sell little bags of this as a snack for gourmands on the go. Cellar-side, the German Pinot Noir married well with the duck, smacking of New World style whilst bursting with an Old World cherry flavour, the perfect twin for the cherry wood tang in the duck.

Ooh, là. Time for another mini-cocktail. This time called the Bitter Fortune. Bitter would relate to the Aperol within it, a spirit popular in the famous Spritz of Venice, which can often taste like cough medicine. On this occasion it was mixed with Tanqueray 10 gin and grape and grapefruit juices, with a sliver of star fruit floating on the surface. The Bitter Fortune made Aperol work for me. Like the Yáng Walker, it smacked of far-flung places and Somerset Maugham short stories, and yet, unlike its name, this tipple was far from bitter.

The Bitter Fortune was matched with two more dishes on our tour: the dim sum trilogy and a soup poetically named Monk Jumps Over the Wall.

The dim sum appeared in a trio of colour, accompanied by a small dish of soy sauce and a paintbrush with which to daub the morsels. The crab pouffe was my favourite – light and warm and softly salty. My resident wine guru preferred the prawn dim sum – blushed pink with goji berry; a tasty variation on the ever-popular har gau, but less insipid than most in appearance, courtesy of the goji. The green dim sum contained chicken and black truffle – an unexpectedly European taste in the midst of a Chinese meal, yet properly fungal, as anything containing that culinary black gold should be. The dim sum had whisked us off to its place of conception: the region of Guangdong, with its Yue cuisine, all hailing from the proximity of the South China Sea, where seafood is a staple for local folk. I think I could live there.

It was time for soup, this time from the south-eastern Fujian province, where Min cuisine reigns supreme. 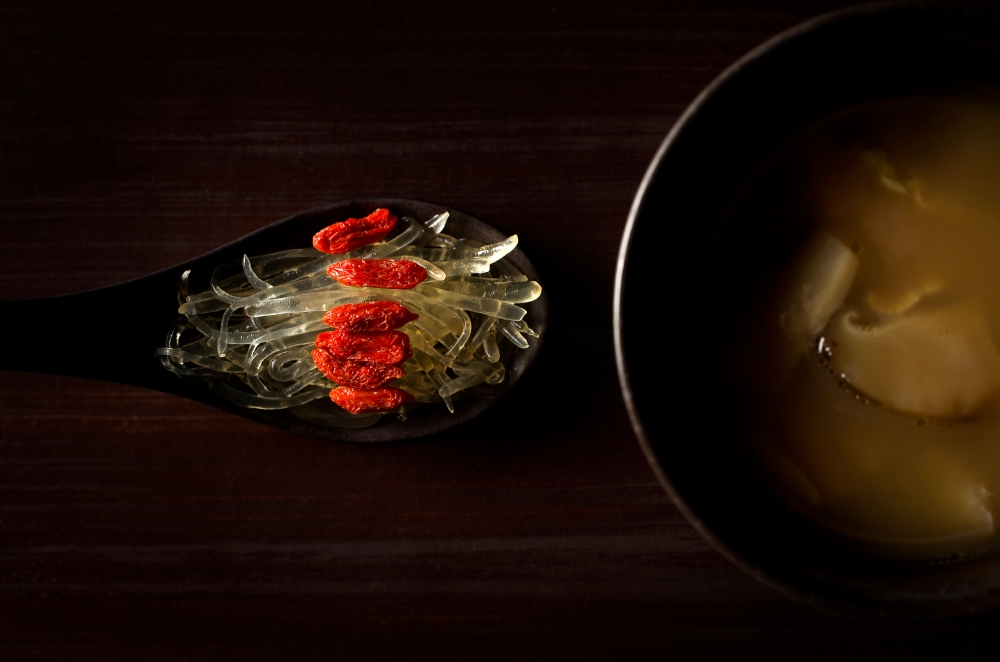 Monk Jumps Over the Wall

As my partner in taste crime put it, the true delight of HKK’s food is its presentation. The chefs here aren’t simply cooks; they are artistes. Our stoneware bowls arrived with lids, on top of which sat traditional Chinese soup spoons laden with glass noodles and goji berries. We stirred the noodles and berries into the soup – a mild broth swimming with abalone, porcini and sea cucumber. The legend goes that a nomadic, vegetarian monk once jumped a wall to eat this soup, such was its enticing aroma, thereby taking an unexpected sabbatical from his vegetarianism. 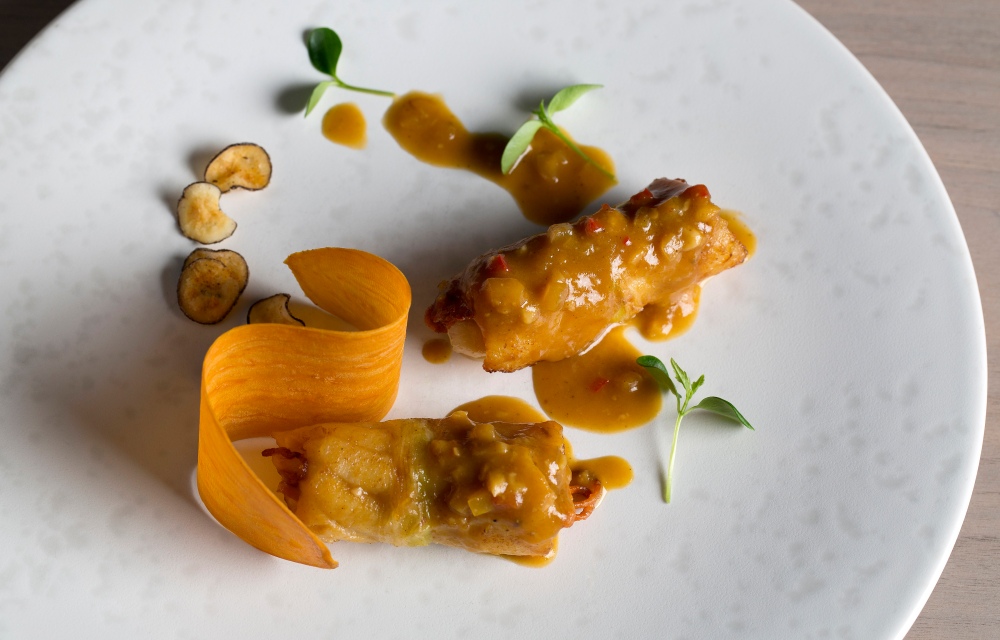 Having somewhat Neptunian taste buds I was looking forward to the sea bass in Sha Cha sauce, a North Chinese condiment containing garlic, chilli, brill fish and dried shrimp. This was soft and subtle, like the wallflower at the dance. Good, certainly, but mild when sat alongside its more robust neighbours. However, the wine match for this dish, a Ramey Chardonnay from California’s Russian River region, exuded fruit and spice, with a Lazarus effect on this otherwise quiet plate of food. The sea bass came to life with this tipple tickling our tongues.  I could happily have taken a case of this Chardonnay home for culinary resurrection purposes, not to mention the guilty pleasures stash.

We’re now halfway through the tour, with five destinations under our tightening belts and five yet to reach. We will travel through yet more Chinese regions and their flavours in the second part of this post.

I was a guest of HKK for the purposes of reviewing their Chinese New Year culinary tour menu. The views expressed here are my own.