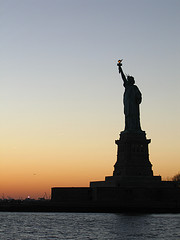 It’s that time of year again, when a weekend in New York looms in Big Apple style on the pre-Christmas horizon. I have long associations with this city; it was in New York that, as a foetus, I first kicked my mother from the inside out, thrilling her with the reality of impending motherhood. It was as a teenager in New York that I first rode in a stretch limo and played the piano with my feet at FAO Schwarz, just like Tom Hanks did in Big. It was in New York that my Stateside friends threw me a surprise birthday party, the only one I’ve ever had, when I’d tiptoed out of London in order to avoid another year older. And now, decades after launching that first little kick, the inspiration to skip, and jump my way up and down that little island known as Manhattan still ignites me from the moment I start to plan a visit.

Some people like to shop in New York City. There’s certainly plenty of opportunity to do that: from bargains to be found at Century 21, located somewhat eerily adjacent to 9-11’s Ground Zero and its ever-present conspiracy theorists, through to the air-kissing environs of Barney’s and Bergdorf’s at the other end of the spender’s spectrum.

However, shopping is not what gets my Big Apple Fires a-burning; it goes deeper than that for me. There’s a vibe about Manhattan which ripples invisibly through the air, up and down the grid of streets and avenues, and straight into my soul. It’s the small things, as much as the skyscrapers, that thrill me here: the excitement of buying Motrin at Duane Reade (SO much better and more cost-effective than Nurofen), Chinese being spoken in Chinatown in front of windows of crispy fried ducks hanging by their feet, a glimpse of hand cuffed to briefcase in the diamond district, meetings beneath the clock at Grand Central Station. A smile threatens to break every time I see a yellow cab with bent plastic fender or when I hear someone in a deli order “pastrami on rye!” or when I pass a man wearing a battered Yankees cap or when a debate starts over where to find the best bagels in the city. Even when struggling to decide whether to go to the MoMA, the Guggenheim, the Whitney or the Frick because, goshdarnit, there’s just too much choice, I feel a constant buzz buzzity buzz.

Plenty of people go to New York to make money and/or spend money and there’s plenty to do there for all tastes and ages. Shoppers ogle at the animated Christmas windows, romantics sigh at chestnuts roasting on street corners and in every crowd you will spot Big Brown Bloomingdale’s Bags. It’s a melting pot of art and culture and music and design and hippy and chic – all in a mere 23.7 square miles. As might sound familiar to those In The Epicurienne Know, it’s New York’s food that really gets me going. There’s such a wealth of variety to be had, just begging for the attention of food lovers like me. So where have I been so far? 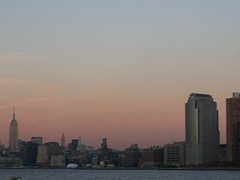 Other New York experiences in the Epicurienne catalogue include eating very average Chinese in an ominously-empty Chinatown restaurant, (now I am furnished with foolproof tips for that area so hopefully history won’t repeat itself in that neck of the woods) where the biggest action took place in the fish tanks. I’ve lunched with the glitterati at Barney’s and twirled spaghetti in Little Italy and ordered pizza delivery at a friend’s Midtown apartment. I’ve hung out with the son of an Irish immigrant who made his fortune pouring beer for the folks of the Upper East Side and I’ve stood with dropped jaw as a woman ahead of me at Dean & Deluca ordered a “skinny decaf soy latte” which is very Sex and the City but defeats the purpose of drinking coffee in the first place. However, my finest hour when eating in New York? Sitting opposite the man I love in the Pomodoro Rosso and NOT getting dumped. You see, the Pomodoro Rosso is THE recommended break-up restaurant in the comedy series, Seinfeld. It also does a very good Sunday brunch menu, which is some consolation if you’ve only just realised that ‘he’s just not that into you’.

That’s all for today. In the next instalment I’m going to write about places on the Epicurienne Hit List, New York Edition. I may need some help choosing where next to dine…suggestions are welcomed because this is a case of so many eateries, so little time. And sadly, only one mouth.