Splendid’s been at it again; this time Splendid people Rax, Chris and Jenny invited me along to a dinner party celebrating GOOD Oil. This is a relatively new concept in cooking oils, being made from hemp seed. As if that wasn’t interesting enough, the creators of GOOD Oil and the off-shoot products of GOOD Seed and GOOD Dressings are none other than Glynis Murray and Henry Braham, probably better known for their combined film credits, including The Golden Compass (Braham was Director of Photography for this Philip Pullman fantasy), Nanny McPhee and Waking Ned (on which they both worked) and many more.

Needless to say, the crew of foodie bloggers, including myself, Chris from the Londonist, Niamh from Trusted Places and Eat Like a Girl, the enviably slim Lizzie of the aptly-named Hollow Legs blog, Mel of Fake Plastic Noodles and Helen of Food Stories were all intrigued to be invited along to a traditional London dinner party at Murray and Braham’s West London home to see GOOD Oil in action.

Prior to arrival I did my research, courtesy of Splendid’s staff and trusty Google. Hemp seed and the resulting oil is incredibly GOOD for you, apparently, containing half the saturated fats of olive oil (of which I’m already a huge fan), and zero trans fats. I was interested to note that a mere 10 ml of GOOD Oil contains the same GLA (Gamma Linolic Acid) dosage of 6 Evening Primrose Oil capsules, therefore enhancing one’s Omega 6 intake with physical effects such as improved skin, hair and nails, and reduced symptoms of PMT. Omegas 3 and 9 are also present, and the overall health benefits can aid arthritis and eczema sufferers, reduce cholesterol and the oil has even been used positively by the RSPCA in helping rescue animals regain condition. The GOOD Oil profile is also beneficial for the maintenance of a healthy heart. 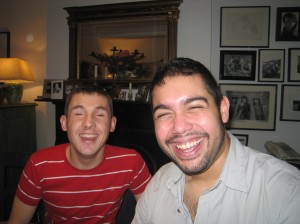 At the Braham and Murray home I was greeted by their right hand Frenchman, Aymeric, and three lovable dogs. Passing through their warm, red-walled drawing room, I was led down the stairs to a buzzy eat-in kitchen, where Glynis greeted me like an old friend as she tossed salad, and her son, Ben, our chef for the evening, stood guard over the Aga. Once the round of greetings and introductions had been made it felt as if I were visiting pals for a reunion dinner party, as opposed to meeting film world icons and revered foodies. Then when Chris and Niamh arrived, they called out “hey! third time in a week!”, as was certainly the case as our events calendars are quite full right now.

We all enjoyed some bubbly (as you do) and conversation flowed before sitting down to sample Ben’s examples of how GOOD Oil works in daily cooking. Rax and Henry chatted about New York, Mel talked about how nervous she’d been giving her presentation at the London Bloggers Meetup a couple of nights before and the dogs rolled over for tummy tickles. Then the first GOOD Oil taster was passed around – pea and pecorino crostini. Heaped green upon the crusty bread rounds, the pea and pecorino, blended with GOOD Oil, was simultaneously smooth and chunky (in a guacamole-ish way), not to mention tasty with a certain nutty tang. That was the oil at work. GOOD Oil, which I’ve had a chance to play with myself, has an earthy and nutty flavour; given how good it is for you (see the King’s report on the GOOD Oil website, link below) I was certainly keen to try more.

At the table, the menu (courtesy of Ben) consisted of a much lauded Venison and Cranberry Casserole, and (as I’m not a big carnivore) specially conceived Prawn Cakes for me and anyone else who cared to try them out. The accompaniments were good, old-fashioned mash, tasting slightly nutty and extra earthy thanks to the oil, and broccoli florets. The conversation was vibrant as we discussed the taste of the oil (different and perceptible without being overpowering), the fantastic atmosphere, Glynis’s and Henry’s film experiences and tried out Splendid Rax’s photographic memory party trick.

Following the main we tried GOOD Oil on salad with cheese and slices of rustic bread, served the French way before pudding, and then ploughed through bowls of ice cream and GOOD Oil biscotti, the ice cream being drizzled with GOOD Oil. I know it sounds strange, but it worked surprisingly well and, if that’s the way you want to get your 10ml of cold and beneficial GOOD Oil per day, then it’s to be recommended. 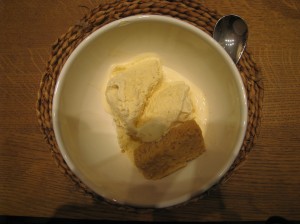 Henry Braham offered an extra helping of pudding to the person who first guessed when balsamic vinegar was first invented. Different eras of the past four centuries were offered before Henry told us that 1976 was the answer, making me think of tiramisu, which was only invented in the 1960s, in spite of being such a firm fixture on traditional Italian menus that it’s easy to understand why people might think it’s generations older. However, in reference to balsamic vinegar, the date of 1976 didn’t feel right. Otherwise, why would Modena sell bottles of its best balsamic aged fifty years, well predating 1976? I’ll come back to you with the answer for that one in another post… It’s not entirely straightforward, yet it’s a fascinating tale. 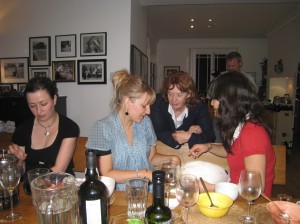 Glynis, the girls and a dog

Elizabeth David also came to mind as she’d famously first praised the cooking potential of olive oil in the UK, when it was something you bought from the pharmacist to help with certain ailments but would never have dreamed of cooking with, let alone eating. Lard and butter were the preferred fats of David’s time.  Hemp oil has had a similar medicinal history and when attempts were made to launch it as a kitchen ingredient in the past, its strong, untempered taste precluded it from becoming a success. No more. Henry Braham and Glynis Murray have spent more than a decade researching, creating and launching GOOD Oil, based at their Devon hemp farm, and this has included a few wasted visits from the local constabulary who thought they might be growing a different sort of hemp for recreational purposes as opposed to culinary. They’ve worked hard to ensure that the taste is palatable and GOOD for consumers and they’re rightfully proud of introducing something new to the cooking and health-food world. It hasn’t been easy for them; a menagerie of kids, dogs, horses, a donkey, not to mention the demands of ongoing film projects, all combine to mean that one night out from their hectic schedules to educate food writers about their hemp oil passion tells us one thing: they BELIEVE in their product.

GOOD Oil already has fans like Hugh Fearnley-Whittingstall and Jamie Oliver to back up its credentials. At the weekend I tried a Hugh F-W trick of garlic toast with a drizzle of GOOD. It was delicious and alternative research tells me that an old-world method of ‘cleansing the blood’ suggested this very recipe only using oils other than hemp, or a spread of butter. Back in my own kitchen I’ve also been working on adjusting various recipes to try GOOD Oil in all guises. You see, following the magical, ever-replenishing postprandial port (which could easily have featured in The Golden Compass), Henry and Glynis suggested I replace olive oil in my cooking with GOOD Oil for 30 days, in order to see its physical benefits for myself. Never one to turn down a challenge, I accepted. I’m onto day three now and you’ll just have to watch this space to see how it all turns out; hopefully at the end of the month I’ll be a Glowing Goddess of GOOD. It’ll be interesting to see if the predictions are correct. I don’t know about the Goddess bit but I’d certainly settle for Glowing and I also know someone whose premature arthritis might just benefit from a daily dose of all things GOOD. It’s certainly worth a try.

If you live outside of the UK and you would like further information on the GOOD hemp seed products, please let me know in the comments box and I will try to find out how you might be able to purchase GOOD Oil from abroad. Can’t promise, but I’ll do what I can.