Next on the last-day-in-Langkawi hit-list was Tanjung Rhu, an island shaped like a junk, as in boat. It appears in lots of advertising media, not just for Malay products, and the natural beauty of the area surrounding the island is definitely worth the visit.

On the way to Tanjung Rhu, we passed a couple of other popular Langkawi resorts: The Datai, reputed for its beachfront luxury, and The Four Seasons, hiding behind a formidable wall exuding the wealth of its guests (don’t ask me how a wall exudes such things; just trust me that this one does).

As we approached Tanjung Rhu beach, we first stopped at a fishing village where the boats were as colourful as the people were friendly. All we needed to do with our cameras was point and shoot. The location and subject matter took care of the rest.

At Tanjung Rhu beach, we were met with a clutch of beach-shack stalls, bright sarongs flapping away like curtains in the warm sea air, beachwear displayed next to ice cream vendors. We weren’t prepared for the beauty of the beach. White sand piled up in gentle dunes and the island itself, exactly like the silhouette of an old-style junk. We sat on the beach for a while. It was almost deserted until a group of teenagers walked near us; boys and girls laughing and chattering away. The only difference between them and teenagers anywhere else was their clothing – no bikinis or beach shorts here. They wore trendy jeans or trousers with tunic tops covering their arms. The girls looked fresh-faced and pretty in their pastel headscarves; one had used diamante butterfly barettes to hold hers in place. That’s one of the things I so like about Malaysia – the veil is a definite part of life here but its use is colourful, fun and feminine, as opposed to its dark, oppressive cousins elsewhere in the world. The girls of Malaysia can still be girls. They don’t have to hide themselves inside black curtains.

When visiting Tanjung Rhu, the habit is to walk to the island. Off came our shoes as we paddled out to the big junk, knee-deep in water at times. A scattered trail of people were making the same pilgrimage, splashing away on the seemingly endless trek. For ages the island didn’t seem to get any closer, in spite of the many footsteps taken towards it, but at last we got there and I have to say that on arrival it was somewhat of an anti-climax.  At the island, there wasn’t much to do apart from say we’d been there, so back we trudged, sand softly squishing between our toes, making it onto the beach just in time before the high tide rushed in after us to snap at our heels. 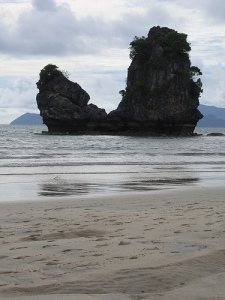 Eventually, we made it to Kuah, parking near the sea terminal where ferries from Penang arrive. The massive eagle statue stood on a landing facing the sea, its wings aloft as if mid-flight. As far as tacky goes, this was pretty bad, yet girls were jostling for position against the bird’s giant claws, posing for photos as if born into a fashion shoot – hands on jutted hips, pouting lips, expertly tousled hair. Not me. SO not me. Those claws were for hiding behind, not posturing upon.

By now, the sky was growing dark with rain clouds and all that threat of storm water was making us jiggle so into the terminal we went, in desperate search of public conveniences. These we found, with a small Ringgit charge for use and a veiled woman, mop in hand, tending to the on-floor water leakage in the ladies. (Monsieur had a man with a mop in the gents, naturally.) Now that the jiggling and uncomfortable thoughts of waterfalls had subsided, Monsieur and I quickly browsed the terminal’s shopping centre. There were lots and lots of duty free shops, as Langkawi is a duty free port. Doesn’t that cancel itself out? Doesn’t duty free become regular local prices if the whole area is duty free? I wondered. Perhaps not. Showing the discounts from recommended retail prices must drive in the business.

As we hit the road again, headed for Pelangi, the clouds rolled together, thunder clapping above us and rain falling in sheets. This was real, drenching, South-East Asian rain, so vital for the land but rather stressful to drive in. Monsieur and I leaned close to the windscreen, trying to see the way ahead. The jeep’s windscreen wipers weren’t made for this sort of downpour. We couldn’t see much at all. Pot holes added to the adventure of our drive back to the resort, and probably added to the wear on the jeep’s suspension from the feel of it. There in the blur was the local night market, but we wouldn’t be visiting tonight. Not in this weather. It’s one outing we would not be crossing off our to-do-list.

Eventually, we turned into the Resort, thankful to be alive. We’d had a couple of near misses which are liable to happen when your view of the road has diminished to Mister McGoo standards. To celebrate, we booked into the Spice Market for dinner, our stomachs roaring, only this time we’d be avoiding local cuisine and tucking into European fare with a glass of wine or two (wine costs the earth in Langkawi so this was definitely a special occasion). Exhausted, we ordered fresh green salads and creamy salmon pasta as the rain played percussion on the roof above. The cats shivered in dark corners; just like cats everywhere, they’re not that happy in the wet. As for me and my dear, French Monsieur, we were safe from the rain, for now.