For our last day in Langkawi, Monsieur and I decided to rent a jeep so we could scout the island for anything we may have missed. Luckily, there weren’t any jeeps available for a couple of hours; the migraine that had been threatening to go full-blown, although still not an absolute head-cracker, had not reacted well to the previous evening with New Best Friend and free-flow beers in the Pelangi Lounge. I lay on a sun-lounger, closed my eyes and prayed for the Malaysian version of nurofen to work. Trust me to leave home without my trusty ibuprofen. Never again.

The rest and quiet did the world of good so I no longer felt like an axe was breaking through my skull by the time we jumped in the jeep. Off we went with a vague sort of tourist map of Langkawi, heading for Oriental Village. We drove past some sights which were now familiar following our chauffeur-driven tour – the falling-down resort, the airport, the marina and the three man-made islands. As we drove up into the jungle, leaving the coast behind, we hit a Langkawi traffic jam, holding us up all of about ten minutes (this is nothing if you live in London, so as we sat at a standstill, Monsieur and I sang along happily to Brady Bunch songs on the radio. Okay, well perhaps it wasn’t the Brady Bunch, per se, but happy songs all the same).

At the head of the jam, caused by roadworks turning a dual carriageway into a single lane, there was a roadsign I’d never seen before. It showed a group of monkeys, indicating that monkeys crossed the road around here and therefore constituted a hazard to drivers. Imagine this: you’re running late for work and call your boss to explain. The excuse?

“Sorry, I’m going to be a bit late. I ran over a monkey as I reversed out of the drive.”

Brilliant. I must try that one some time.

We pulled into the car park at Oriental Village, a purpose-built visitor complex at the base of the Mount of Mat Chinchang. As always, the hot, humid air hit us like a wall as we got out of the air-conditioned jeep. (Come to think of it, air conditioning and jeeps sound wrong together.) We were soon jetting up the mountain in a modern cable car to view Langkawi from high. At the top of the Mount there are viewing platforms from which you can take fantastic photos. There’s also a pedestrian suspension bridge like a snake of steel cables between peaks. I didn’t make it very far along the bridge because it trembled (as suspension bridges are liable to do) and seemed to hang in thin air. It was also a long, rocky, bushy way down to the ground below. Chicken-licken here walked back to the non-shaky platform and stayed there, feet firmly planted on a surface that did not shake.

Back at the village, we visited the gift shops. They were filled with everything you’d expect from such places – batik gifts, local craftware, prayer wall-hangings, breakables, souvenir spoons and the universally popular snow shakers, making me wonder why people insist on manufacturing snow shakers for places where it doesn’t snow. I was now on a mission to find tacky postcards to add to my collection. So far on this trip I hadn’t managed to find a single one; not even an ancient seventies picture of a hotel! Here I managed to find some sickly greetings postcards featuring soft-focus kittens and a whole lot of pink, but that was about as successful as my quest got. 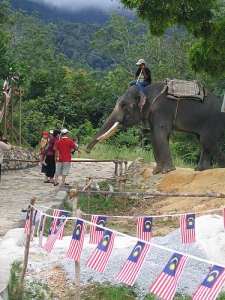 Walking through the village, we saw an elephant taking people for rides. I’ve never ridden an elephant and I’d love to, but we didn’t have enough time so I’ve put this on the future adventure wish list along with swimming with dolphins. It was pretty quiet at the Village, considering. As we sat with a bite of lunch (fish ‘n’ chips for me, something resembling food called a chicken chop for Monsieur – everything else was closed), I noticed women in broad-brimmed straw hats quietly tending the gardens around the Village. There was something so humble about them but the plants all looked luscious so they must have been doing something right with the elephant dung.

Before leaving Oriental Village, I dragged Monsieur into the petting zoo, where huge bunnies lay sprawled out in the shade and deer sat watching us, calmed by the heat. It was obviously animal siesta hour. We could quite easily have curled up under a tree ourselves at that point, but it would have been a crime to leave Langkawi without paying homage to the giant eagle statue in Kuah or visiting the beach at Tenjung Rhu. We had places to go and photos to take. Back in the jeep we jumped, heading off down the road with two pairs of keen eyes watching for monkeys crossing.