One day, Monsieur and I found ourselves suffering from Resort Fatigue so we decided to get out and explore the island on a chauffeur-driven jeep tour. We were collected from main reception before being whisked out of the complex and into Langkawi’s beautiful landscape. Our driver was friendly and full of advice regarding what we should see. As we drove down country roads bisecting the low-land paddie fields, we saw water buffalo grazing knee-deep in water and locals tending their crops. Little houses with chicken coops stood between the verdant fields and everything was lush with good health. 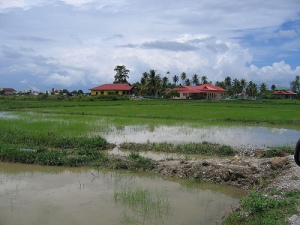 Our first stop was the Field of Burnt Rice, related to one of Langkawi’s many legends. A beautiful woman named Mahsuri was married to the chief of the island and subjected to the petty jealousies of her mother-in-law. When Mahsuri’s husband left to fight the Siamese, who were threatening Langkawi, Mahsuri’s monster-in-law suspected her of committing adultery with a travelling musician. Mahsuri was subsequently executed by sword, as sleeping around behind your spouse’s back was a sin punishable by death, as it should be 🙂 but as Mahsuri died, her wounds gushed white blood, symbolising her innocence.

During the unusually long-winded execution which took a while to complete thanks to blunt swords, Mahsuri took some time to cast a curse on Langkawi:

“There shall be no peace and prosperity on this island for a period of seven generations.”

That was in 1819. The islanders soon had reason to believe this curse because shortly after Mahsuri’s death, in 1821, the Siamese army invaded Langkawi and Mahsuri’s father-in-law, Dato Karma Jaya, worried about what would happen if the island’s rice store fell into Siamese hands, so he ordered it all burned. The locals then suffered from food deprivation, again proving the curse’s validity in their eyes. It also seems relevant that anyone with “Karma” in their name should be wary of creating negative karma themselves by starving their people, even if you do achieve your aim of starving the enemy.

The Field of Burnt Rice is where the rice store once stood. To this day, grains of blackened rice still appear after rain in an area called Padang Mat Sirat. It’s believed that the rice was buried there before being burned. Nowadays, there is a small monument to Mahsuri and her curse at the Field of Burnt Rice, but islanders believe that the curse has lifted as the seventh generation descendant of Mahsuri, Wan Aishah, was born in Southern Thailand in 1980. The modern Langkawi thrives, thanks in a big way to property development and tourism. 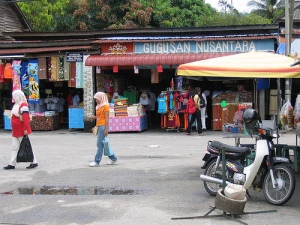 Monsieur and I wandered through the market at the Burnt Rice Village, a thriving collection of stalls selling everything from colourful, beaded headscarves to typical touristy tees and shell jewellery, then looked at the giant Bonsai standing unceremoniously in the car park. It seemed a shame that such such a grande dame of the art of Bonsai should be growing there.

The driver then took us the Atma Alam Batik Village, where we saw the batik process in its various stages (batik is a method of decorating material by using hot wax outlines which remain white when dye is painted over them). The adjacent shop was filled with batik paintings, shirts (which were so splashy that Monsieur shied away instantly), scarves and sarong-style skirts with matching tops. I bought a few pretty headbands and some hand-made paper notebooks as gifts, but the disappointment of the staff that we weren’t Big Spenders was palpable, in spite of their smiles.

Back in the jeep, we drove further around the coast as the driver told us about the effect of the Boxing Day Tsunami on Langkawi.

“We were very lucky here,” he told us, “Only one person died and she was very, very old so she was probably going to die anyway, with or without the tsunami. When the wave came, the water flooded the coastal areas and the pools at the Pelangi Resort were filled with fish!”

Now there was an image for us. Click here for Langkawi tsunami photos.

We rounded a bend, following an inlet leading inland. Ahead of us was a modern village with shops and restaurants and a marina filled with gin palaces. This was Pantai Kok Harbour. We made a comfort stop at the marina and even in the brand new ladies’ room, the loos were Turkish-style and water and urine covered the ground. I pondered how safe such practices were, given the slippery floor. One thing cannot be disputed, however: going Turkish is definitely good for your leg muscles.

As we motored on, the driver pointed out to some islands at the mouth of the harbour.

“Man-made?” we asked, like a pair of Doubting Thomases.

“Yes, man-made. Those islands are to make the bay prettier and give the boats somewhere else to moor.”

Now, the road was rising and the sides of the road were thick with jungle. We were going to see a famous waterfall and as we approached the car park, signs of the tourist were evident. At the many rubbish bins dotted around, families of macaques were sifting their way through the rubbish, looking for something to nibble and strewing anything inedible in a great mess on the ground. They weren’t in any way disturbed by cars or people. These monkeys were quite used to humans and far from intimidated by us, as we were about to see.

At a snacks kiosk by the car park, a group of visitors were buying ice lollies. One turned away with his refreshing twister, removed it from the wrapper and took an audible slurp. That was all the encouragement required for one old monkey. He jumped up, grabbed the ice lolly and returned to the curb where he polished it off at leisure. We all stood in amazement at this blatant theft. The tourist, a strapping chap, was completely thrown by the act.

“Can I get you another one?” asked one of his group,

“No way. I’m getting out of here.” he spat, casting a death glare at the monkey and stomping off to the waiting bus. 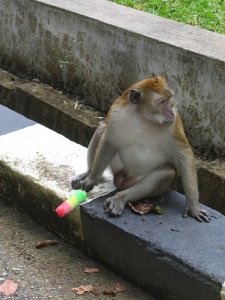 At just less than a mile long, the trek through the jungle was uphill in the intense humidity, but the path was new and wide, if a little slippery at times. The falls at the end were worth our effort, though. Called the Seven Wells Waterfall, or Telaga Tujuh, a freshwater stream cascades via six pools to a 90 foot fall dropping into the seventh. The legend of this place tells of fairies visiting the seven wells to bathe, drawn by the natural beauty all around. We could see their point.

Continuing our tour, we were next taken to a spring with healing waters called Air Hangat, or ‘Hot Water’. This is the site of yet another Langkawi legend, where two feuding families were hurling objects at each other until one side threw a pot of hot water. The pot fell on the ground and a hot spring immediately manifested on the spot where the pot landed. The area is geothermal so perhaps it just took the thump of a landing pot to set off the spring. Who knows? Ever since, the hot waters have been praised for their healing properties for the mind and soul and a cultural village has grown around the spring.

Monsieur and I weren’t really that interested in Air Hangat, if the truth be told. We were dying to get into Langkawi’s big town, Kuah, to do some shopping. Langkawi is a tax free zone, you see, so everyone shops here like it’s a sport. But our driver had been so good to us that we visited the complex to be polite. Inside, the hot spring is fed into modern channels in the typical geometric shapes of Islamic design. It was beautifully done, if a little sterile, but I admit I was more interested in the salad servers at the gift shop. They were a dark, speckled wood, so I bought a pair for home. For their exotic beauty, they were ridiculously cheap. Something like RM8 each! They’d probably sell for £30 or more in London. Hrmph. Perhaps I should go into business.