It was nearing the end of our ‘vacances’ in the South of France last summer and we spent our last morning visiting the town famed for brocante: L’Isle-sur-la-Sorgue. Walking through the picturesque centre-ville, that day brimming with parading brass bands in competition, their supporters and weekend visitors like ourselves, we’d worked up quite an appetite. Rather than stay in town, which offered a fair number of riverside terrace restaurants with postcard views, Monsieur and I drove back into the surrounding countryside, to visit Restaurant La Villa.

Initially, we thought we might have been lost, because the area in which this restaurant is located is so very residential that garden play-sets are visible from the street. We continued with the directions, until we found a gate and a huge, grassy parking area, more like a massive lawn than a place to leave cars. Beyond the car park was another surprise: a large swimming pool, dangerously inviting on such a blistering day, but had we come to the right place? Was this an eatery or was it someone’s home?

At the swimming pool all became clear; to one side lay bronzed patrons, basking on loungers; to the other were tables in the shade of an awning – there, we would dine. Practically all of the terrace tables were taken. There were more seating areas inside, but no one wants to be overly sheltered on such a halcyon day; the interior was devoid of life. Fortunately, the warm waiter who greeted us only shook his head for the briefest of moments when we admitted we had no reservation. Weekend lunches here in summer are usually fully booked, he explained, yet he found us a table and, unbidden, located a fan to keep us cool. 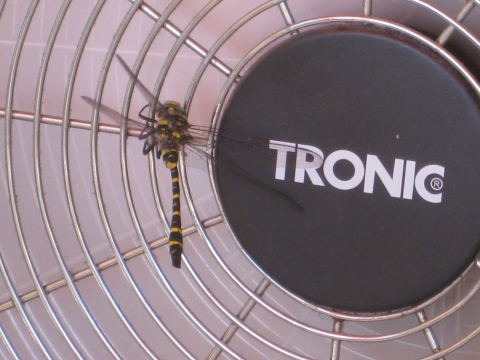 This dragonfly was mesmerising. She clung to the fan to cool herself before flitting off around the pool, only to return moments later for a refresher.

The menu was far from exhaustive, allowing Monsieur and I to make our choices with some speed. We were ravenous by this stage, in spite of the heat. I decided on the seafood salad, while Monsieur probed our waiter about the cut of pork and which part of the beast it hailed from. Taking Monsieur’s shoulder, the waiter caressed it a little too attentively as he explained exactly which body part Monsieur would be eating. From across the table, my husband flashed me a look of bemusement and I stifled a giggle. Our waiter was absolutely lovely, very gay and, now it appeared, rather tactile when it came to explaining the source of his meats. If only all wait-staff could be like him, we’d  be very happy diners indeed!

My seafood salad kept me silent for quite some time. It was much larger than I’d anticipated and consisted of powerfully fresh ingredients which were beautifully presented.

The king prawns were succulent in the extreme, anchovies on a perfectly golden crouton were a contrast to the rest of the salad in both texture and saltiness and the scallops had been seared with skill, retaining a silken consistency which gave them bounce in the mouth. No complaints from me. The dragonfly continued to come and go from the fan. I didn’t blame her; it certainly was hot.

Too hot (in my opinion)  for what Monsieur chose to eat: a ‘plume’ of pork, from Mont Ventoux,(a regional mountain of note where the pigs must be happy with their lot, making them taste better) served with aubergines and sautéed potatoes.

Monsieur and I cleared our plates, coughed up the requisite Euros, thanked our charming waiter, left the sun worshippers behind and set off for Avignon and our last night of vacation. We had a wonderful evening planned, replete with ‘last supper’, but for now our appetites were sated and we could travel happy.

**In summary: Restaurant La Villa serves excellent food without pretention or attitude. A wonderfully relaxed setting in which to chill out of a weekend. In case of disappointment, I wouldn’t recommend chancing it like we did; definitely book in advance for weekend brunch in the summer.