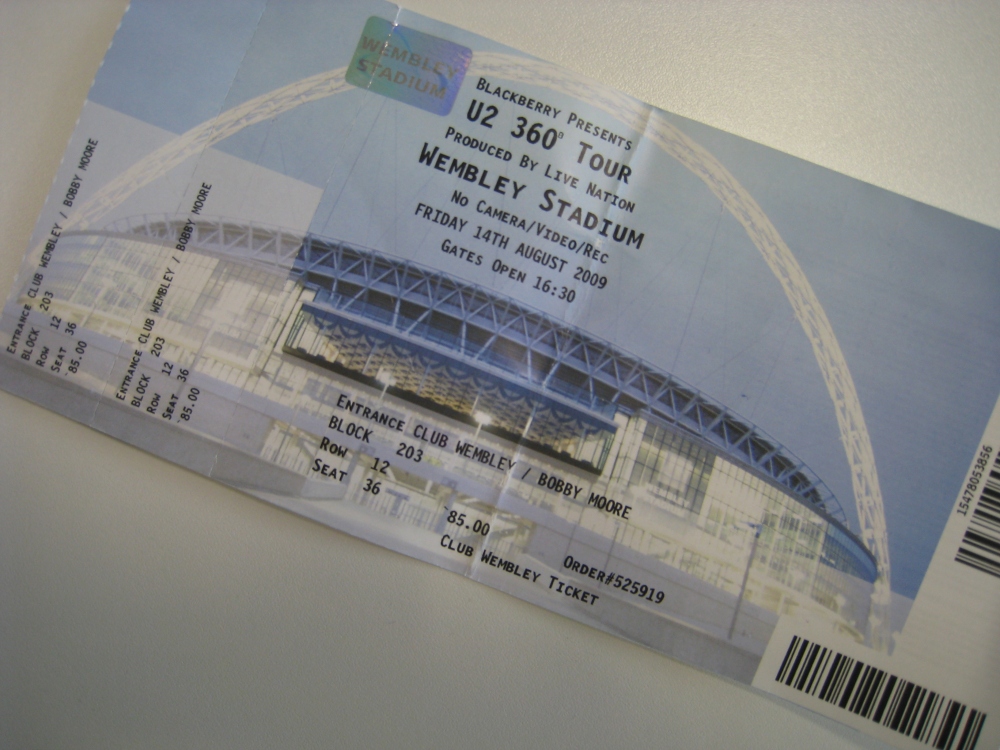 U2 (and my youth) Revisited…

Seeing U2 at Wembley Stadium last Friday night was a revisitation of sorts for me. I’d first seen U2 live in New Zealand when I was a teenager, with many of their songs like Sunday Bloody Sunday and tracks from the Joshua Tree album becoming anthems that still bind a faithful group of friends. Wembley Stadium is a place where I’ve seen Elton John in concert and attended one of those positive thinking seminars where you finish a day of mumbo jumbo by walking on hot coals, but that was the old Wembley. I hadn’t yet been to the new Wembley Stadium.

So what about Wembley Stadium?

Last Friday saw me there with Monsieur, who’d decided that a concert date was in order – how right he was. The new stadium was state of the art, with a great sense of space achieved through the wraparound glass exterior. Uniformed greeters stood everywhere, almost overwhelmingly present and annoyingly chirpy “enjoy the concert!” “thank you for coming!” “do you need help?” “let me see your ticket so I can direct you,” and so on. It might sound surly because in the States this sort of behaviour is expected, but here in service-challenged England, it’s such a Stepford-style oddity that it made me wonder where in the world I’d woken up that morning.

As for the food…

There were eateries everywhere, including champagne and seafood bars, snack stops and take-away counters. We opted for a quick turn-around mass service-style brasserie where we ordered at the bar and ate very expensive yet average food whilst watching the crowds continue to arrive from our table by the neverending glass perimeter of the building. But £32+ for two mains that, although good, didn’t warrant their £12.50 price tags, and a couple of pints of lager. I could have sworn I heard Monsieur’s pocket scream OUCH!

No queues for the loos!

A quick pit-stop impressed me because there were no queues for the loos, everything was spotless and those faster-than-the-speed-of-sound hand-dryers practically blew me into the next century. This was one efficient venue.

No later than they ought to be…

More importantly, finding our seats was easy, thanks to a surplus of the Stepford Staff to help us. But did U2 keep us waiting? Nope. They kicked things off right on time. How refreshing, given the number of prima donna acts who turn up more than a little late, not giving a monkey’s about their faithful fans’ patience wearing thin.

The stage hits a bulls-eye.

The stage was supposed to be visible from all sides, hence the name of the tour, but one area of seating remained empty as visibility from that bank of seating was impeded by a tower covered in Blackberry signs. On stage, its open nature with a pair of movable bridges linking to a full circle of track, allowed the band members to interact with the audience in more parts of the stadium than a regular stage, especially benefitting some super-keen fans who’d bought tickets for the space in the midst of the bull’s eye created by the 360° stage. Bono, The Edge and Adam Clayton took full advantage of the track’s closer proximity to fans by crossing the bridges to play on the track at different times throughout the performance, making this stage, with its massive 4-pronged claw, something completely different. This didn’t change the fact that the band members still looked like grasshoppers from a distance, but it didn’t matter because we were really there for the music and the screens helped keep the eyes busy.

Check it out HERE.

But it doesn’t come without criticism.

No, the ‘Claw’ with what looks like a radio tower at its zenith and a jigsaw of LCD screens at the centre, uses a lot of power for the various lighting and effects that it creates. Not the greenest option for a ‘green’ band, but The Edge has promised that U2 are arranging to carbon offset all their concerts and the fact that a modest 200 lorries are required to get their kit from A to B to C and on to Z. There are 44 international dates for the 360° tour, after all. That’s one heck of a lot of carbon offsetting bills.

I admit I wasn’t crazy about the first few songs from U2’s recent album No Line On The Horizon, which really hasn’t done it for me (in my humble opinion I think it sounds lazy and repetitive), although the fault could well be mine judging by the possessed bodies gyrating madly around us from the start. Then again, they may well have been born without the Taste In Music gene.

Things for this particular groupie kicked off with Beautiful Day, a feel-good song that never fails to lift ailing spirits. Then old favourites like Stuck in a Moment and I’ll Go Crazy got the crowd well and truly pumping. One chap in our row was very tall with a Midnight Oil approach to individualistic dance style and a pair of girls in front were Very Well Behaved with their Much Older Boyfriends until the music started. Then their arms jabbed at the air as they shouted along to every word of every song in a Very Excitable Manner. By the end of the evening, the boyfriends looked knackered and a bit bewildered, as if they had a new appreciation for their former wives and quiet dinners at home.

Breathe, No Line on the Horizon, Get on your Boots, Magnificent, Beautiful Day, Blackbird, Elevation, I Still Haven’t Found What I’m Looking For, Stuck in a Moment, Unknown Caller, The Unforgettable Fire, City of Blinding Lights, Vertigo, I’ll Go Crazy if I Don’t Go Crazy Tonight (** FANTASTIC remix), Sunday Bloody Sunday, Pride (In the Name of Love), MLK, Walk On, Where the Streets Have No Name, One, Mysterious Ways.

Ultra Violet (Light My Way) – with everyone in the audience waving their mobile phones to create starry starry night effect, which was absolutely beautiful,

With or Without You, and Moment of Surrender.

Was and is and probably always will be Sunday Bloody Sunday, which had a few lines of Rock the Casbah by the Clash worked into it for this concert. It worked very well.

But do you know why?

I’m so old that I can tell you that Sunday Bloody Sunday and Rock the Casbah were released around the same time – 1983 and 1982 respectively. For such seniors as myself, this was a clever mix, transporting me instantly to an era of legwarmers and shoulder pads. (The first time around)

Politics, anyone? Who was mentioned this time?

Well, there was a bit of Nelson Mandela, some Archbishop Desmond Tutu, a plea for women’s rights in Iran and Martin Luther King is an inescapable U2 presence thanks to the success of Pride. But the main focus of U2’s attention was Aung San Suu Kyi, the Burmese politician being held under house arrest because she’s such a threat to the current government of Myanmar that they dare not let her out, lest she win the next election. I have mixed feelings about mixing politics with pleasure, though. Fair enough, the people U2 choose to support are worthy individuals and it’s better that U2 do something positive with their fame rather than snorting it up broken septums whilst trashing hotel rooms. And fair enough, some of U2’s best songs concern politics. But I’m not sure I feel comfortable with their politics being force-fed to a crowd of 88,000 people. It’s not exactly as if you can turn it off until they’ve finished preaching. Perhaps their tickets should be sold with a political content warning? Or perhaps they should pick one cause as a theme for each concert tour and stick to it, that way they’d avoid sounding like a charity pick ‘n’ mix.

Speaking of which, who were all those people in black tees emblazoned with ONE and smart red netbooks? ONE is a charity co-founded by Bono, and the black tee brigade were signing up new supporters. I loved their red netbooks. SO smart. Must remember to tell Weldon Kennedy, ONE blogger and BLOG08 buddy, next time I catch up with him, which could be a while, given that he’s following the 360° tour in the name of ‘work’ at present. What a great job!

On leaving, the layout of the Stadium was impressive as it allowed people to exit their respective areas without the usual elephant stampede. The crowd was orderly, not worthy of the attentions of mounted police stationed at regular intervals. Successfully avoided all horse manure, reaching the tube within minutes. There we found the expected crush with smelly armpits and the opportunity to study the nasal pores of  fellow concert-goers at closer proximity than their dermatologists but, once moving, we were home well before the hour of pumpkin metamorphosis.

A really good night out. U2 are getting older, as am I, so this concert understandably lacked some of the va-va-voom of the Joshua Tree Tour that I caught as a teenager, but I still wouldn’t have missed it. Result? Overall, in my eye’s, success.

What did the critics say?

In one of this week’s free evening papers, U2 were slated as being overrated. Possibly there’s an ounce of truth in that, but nobody can deny that they’re still excellent performers with a great catalogue of music. Now if we could just lower their concert tour’s carbon footprint,  lose No Line on the Horizon and stick with a maximum of one charity or idol per tour, we just might be onto something. Then again, that would be so very UN-U2.