In the darkest days of January, when we were still in the throes of post-Christmas empty pocket-dom, a pair of my colleagues and I conjured a carrot to dangle before our noses and lead us out of the gloom: we decided to put a date in the diary for a trip to LiKo, or Little Korea Restaurant, one of London Soho’s culinary gems with crunch-friendly prices.

The time eventually passed and the excitement among us was tangible. At long last we’d be eating the Korean-stroke-Japanese food I’d heard so much about. En route to the restaurant, it snowed, it sleeted and then it started to rain, so entering this initially uninspiring restaurant with dusty plastic sushi in its window and rows of oriental celebrity autographs in scribbled Korean or Japanese (who could tell which?) on one of its walls, was to be rescued from the forces of nature, at least for a couple of hours.

Following Little Miss Denmark, our designated leader for the evening as she knows LiKo well, Mr Positivity and I bypassed the ground floor in favour of the basement, a windowless room filled with non-descript furniture, an unmanned sushi bar at one end with stacks of bento boxes and aluminium take-away trays ready to be filled. Denmark and I were the only European faces in the room; everyone else was Korean or Japanese or Chinese. They obviously approved of this place and I was about to find out why.

We sipped on warm sake and icy Asahi beers as we chose our meal for the evening. Denmark grew up in Japan, so she knows her stuff in a place like this, as does Mr P, whose Chinese background and passion for oriental foods combined to make this an evening worth waiting for. 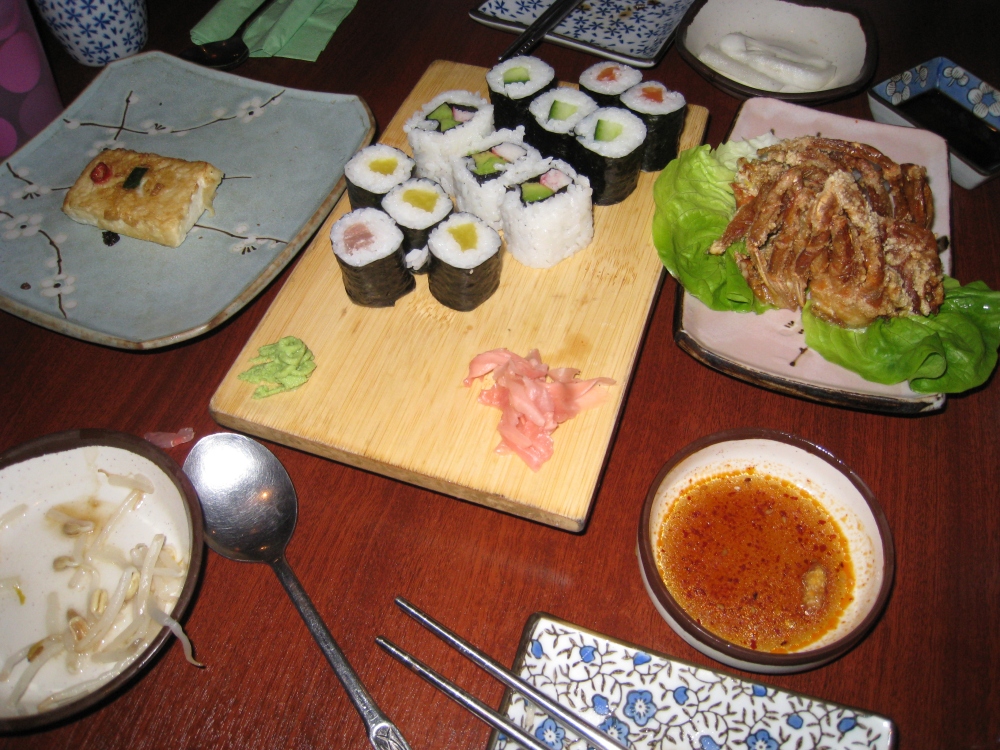 We started with a shared platter of sushi and several half-moon dumplings (or gyoza) filled with velvety pork and chives. They were delicious. I could probably have consumed three plates’ worth all by myself. Meanwhile, the sushi arrived on a rustic slab of wood with a small mound of ginger on one corner. The maki and California rolls were fresh and good and nothing spectacularly different from sushi elsewhere, but it was certainly an ideal selection for sharing. The conversation turned to ginger – do we like it? Don’t we? With sushi? In tea? To ease nausea? Until now, I never knew that ginger could incite so much passion in a trio of amateur foodies. Now we know. 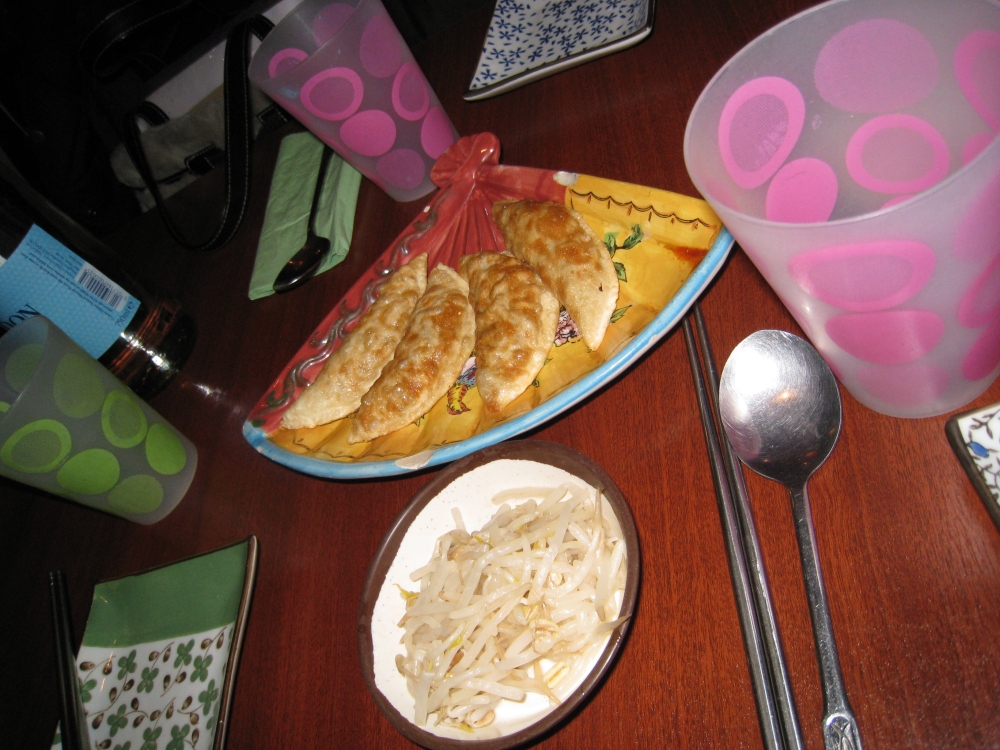 Soon my attention was tempted away by the arrival of soft shell crab. Anyone who has read about my Malaysian adventures on this blog will already know about my obsession with soft shell crab. On a wet and freezing night in mid-winter London, to eat something so reminiscent of warm, seafood-friendly environments brought the sunniest of smiles to my face. “You can have the last bit,” offered Denmark. “Yes, absolutely,” seconded Mr P as he flashed his signature smile, so for once I didn’t argue and chomped on those last few crispy crab legs with one hundred per cent guilt-free relish.

Little Miss Denmark and Mr Positivity were now discussing the merits of deep-fried tofu. I’m not usually a tofu fan, but wherever I go I’m tempted to revisit such things just in case I got it wrong, or rather, just in case the chef got it wrong on my previous attempt. Boy, was this ever one of those times where that little rule worked beautifully. Denmark had ordered the deep-fried tofu that she’d been craving all week and when the little golden rectangles arrived, they were nice enough but not particularly thrilling. “Oh, no, that’s not what I meant,” she complained, “I thought we’d be getting the smoked tofu cubes in the plate of dipping sauce.” She was so disappointed that Mr P and I could only do the decent thing and insist that we ask for the exact tofu of her desire. This was an exercise in how two tofu dishes can be like chalk and cheese. The new arrival looked as golden-icious as the first, the cubes sitting in a light soy sauce with finely chopped salad onions floating about in it. On biting into them, they were just the right sort of hot, that is, not endangering the upper palate, and there was a delicate smokiness to each creamy bite. Oh yes, I am now a tofu fan; it just has to be this sort of tofu.

Whilst our tofu comparison exercise was gathering momentum, a waitress quietly moved a portable gas stove onto the end of the table. She placed a wok on top of it, already filled to the brim with seafood and vegetables and a lethal-looking red paste. Everything was arranged beautifully in layers and rows, with mussels in their shells fanned around the top. The gas was lit and after a while the sauce beneath began to bubble up around the contents. Mr P started to fill our bowls with ladles of broth and seafood, then adding soba noodles to the mix, just long enough to heat them through before dividing them amongst us. This was the Korean hot pot. More commonly eaten with beef, we’d chosen the equally enjoyable seafood version, although at this point I was finding that my ability to eat much more was fast diminishing. I slowed down, savouring each prawn and mussel and slice of sweet potato and mouthful of squid. In spite of the red paste that had earlier looked so likely to make you flap your hands and pant like a dog, once stirred into the broth it had merely provided a nicely warming zing, as opposed to searing the tongue. 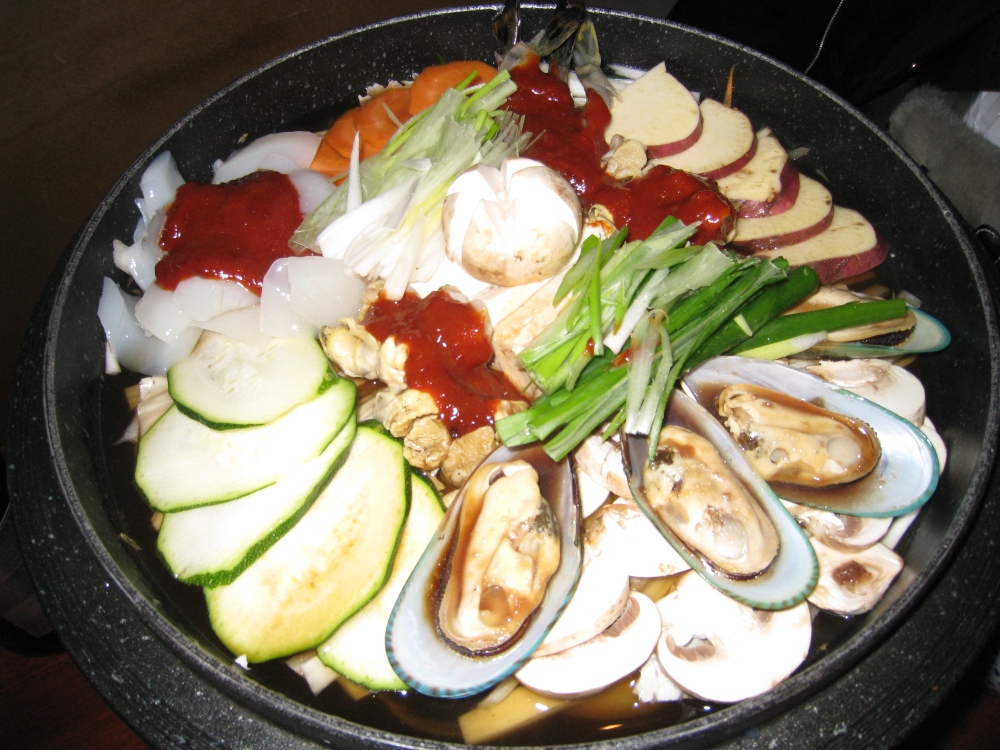 Now contentedly full, I had to decline all else but a tiny spoonful of Mr P’s green tea ice cream. As it was, when we left amidst cheery farewells from the staff, we were satisfied but not stuffed to the point of immovable. Nor had our slowly recovering bank balances been badly dented by the feast. As promised by Denmark, this was affordable, fresh and tasty fare and three happy little foodies were we. At long last we had visited Little Korea and it was transporting, right down to the foreignness of the loos with their dank basement smell and strange-smelling fuchsia pump soap. The people, the food, the unpretentious decor and those dusty plastic pieces of sushi in the window – all made this culinary exercise feel more like a weekend away than an evening spent in London. My only regret? We forgot to try the kimchi so I guess we’ll have to go back and this time, smoked tofu will be top of my list.