Pat Coakley keeps her readers busy. There’s no excuse for boredom with Pat on the case, inventing new homework for us all with astounding regularity. One of her recent challenges was photographing manhole covers. At the time I took up Pat’s challenge, Monsieur and I were in Nha Trang in Vietnam. Easy peasy, I thought, I’ll find some great Vietnamese manholes for Pat. But it wasn’t that easy. At first, I couldn’t find any manholes to photograph. Not a one. I started to doubt that Vietnam had a sewer system.

Our last Vietnamese city on the itinerary was Ho Chi Minh City so when we arrived I immediately started watching the ground. “What are you doing?” Monsieur asked, forehead rumpled. “Photographing manhole covers,” I replied, as if it were the most usual thing for me to be doing on holiday. “Why?” asked Monsieur, confused once again by his UNusual travelling companion. “For one of my blogging friends.” I told him. Another frown. The blogging world is still a bit of a mystery to Monsieur.

After a while, and only looking up to dodge oncoming motorcycle traffic, I found a Saigonese manhole: 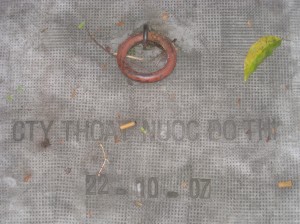 The following day, I photographed a different sort of manhole, this time with a man IN it! That’s right, people, this manhole was so well disguised by dead leaves and undergrowth that I had to find a local model to demonstrate it. Unfortunately, Monsieur and I simply would not fit down the teeny weeny manhole made for teeny weeny Viet Cong, so this chap, with the hips of a Barbie doll, obliged instead. This shot was taken at the Cu Chi Tunnels, just outside of HCMC. The Cu Chi Tunnels were a sophisticated network of underground tunnels and chambers created by the Viet Cong in the late 1940s and of particular strategic influence during the American War.

The tunnels included kitchens where cooking smoke was vented through a type of hole that dissipated it prior to releasing it into the outside air. The Viet Cong also made false tunnel entrances so that anyone trying to infiltrate their underground home would be greeted by a welcoming committee of fire ants, scorpions, snakes and other pain-inflicting creepy crawlies. In spite of the amazing creativity and intelligence behind the creation of the Cu Chi Tunnels, two thirds of the Viet Cong using them would be dead by the end of the war.

When Monsieur and I finally made it back to London, we found grey skies, cold air and constant drizzle. As my mother said: “you and Monsieur have missed nothing weather wise. It’s rained almost non-stop while you were away and there have even been floods.” Yep. We’re back. On Sunday I braved the rain on my way to the supermarket to re-stock our fridge. Naturally, I took my camera so I could photograph a London manhole cover. For some reason, I hadn’t noticed that in our ‘hood they’re all square or rectangular:

The Manhole Mission also made me think of the manholes in Rome, which are emblazoned with SPQR, Senatus Populusque Romanum, or Senate of the People of Rome. SPQR has been knocking around since the time of the Caesars, quadrigas and laurel leaf hair accessories, so this has to be one of the best manhole covers in existence: 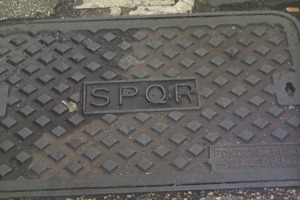 Isn’t it incredible how something we walk across every day can become an object of interest once we decide to photograph it for Pat?