As I was growing up, World War II was still in relatively recent memory for my New Zealand family. My great uncles had fought in New Guinea, my grandfather was posted in North Africa and Italy and, as a child, my father had nightmares about Japanese soldiers breaking into his room at night. One of my great aunts had lost her first great love to the war and three neighbours were unmarried sisters whose chances at marital bliss had been shattered by the lack of single men returning from the war so had therefore set up home together. There were the incredulous tales of my mother never having seen a banana until the war was over, or of the lack of materials, of turning hems on skirts to make them last longer and other privations. Compared to what was happening in Europe, however, the New Zealanders at home were lucky. Rationing didn’t come into force until 1942 (compared to 1940 in the UK) when the purchase of sugar and tea was first restricted, and pork eating became illegal in 1943 as pig farmers were ordered to send their product to feed American troops in the Pacific. How could pork-eating possibly be illegal? Not in pig-loving New Zealand. All of these tales were by far the best thing about spending time with my mother’s family. The conversation always overflowed with anecdotes and interest.

Sometimes when we were visiting the family, we’d drive to Hastings for a change of shopping or to visit my mother’s great aunt who was stone deaf, rode a bicycle everywhere in spite of her age, and entertained us kids by giving us a big bowl of walnuts from her ancient tree in the garden with a nutcracker. Those were pre-Nintendo days, so activities like cracking nuts gave us a tremendous amount of satisfaction, especially as we didn’t crack nuts at home. If Mum wanted walnuts for her baking, she’d buy a pack of the ready-chopped variety from the supermarket. Here, they fell off a tree. How cool was that?

Another treat on the trip to Hastings was the possibility of a stop at Rush Munro’s Ice Cream Gardens in Heretaunga Street. This mecca for the ice cream lover is still in existence, having been established in 1926 by Frederick Charles Rush Munro, New Zealand’s very first ice cream manufacturer.

I remember Rush Munro’s as an ice cream parlour with a difference. The ice cream would be whittled with a spoon into a conical shape on top of a squat orange cone and always tasted a bit special. The cherry on top (not literally) in this case was the gardens where there was a fish pond filled with koi carp. I could watch the giant carp for ages as they glided around their pond in a swish of gold and white. Meanwhile, at the counter filled with drums of creamy wickedness, Mum always had trouble choosing between rum ‘n’ raisin or that staunch bastion of New Zealand ice cream creations, hokey pokey. All the usual flavours were there to choose from: chocolate, vanilla, strawberry, boysenberry and banana. Checking out the current list, I am interested to see the following concoctions: feijoa, malted milk, maple walnut and passionfruit, with the promise of more flavours in development.

Yes, there is such a thing as a boysenberry and for some reason, just as we have a fondness for hokey pokey ice cream in New Zealand, so do we appreciate this strange berry that sounds as if it belongs on the pages of Willy Wonka and the Chocolate Factory. I know what they look like and I know what they taste like (a bit like a raspberry with greater depth and richness; a bit tart) but I also know that in the UK I have never, ever heard mention of boysenberries, be they in ice cream, in tins on supermarket shelves, in recipes or on cooking shows. So, in my ignorance, I turned to Wikipedia to help me out and find out that they are:

“suspected to be a cross between a loganberry and the western dewberry,”

and that they were: “discovered on Rudolph Boysen’s farm in northern California. Walter Knott was the first to commercially cultivate it in southern California. His family’s small restaurant and pie business eventually grew into the theme park, Knott’s Berry Farm.” 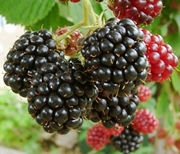 I’ve been to Knott’s Berry Farm so I’ve therefore unwittingly visited the home of the boysenberry but on that particular excursion I was barely eight years old and far more interested in panning for gold or taking rollercoasters than discovering the ancestral home of a fruit.

Still not quite over the rollercoaster stage but definitely more interested in food origins, I googled a few UK supermarkets. No boysenberry anything available, so it would seem. But if you google ‘boysenberry uk’ there are some places you might be able to pick up some jam if you crave a taste of it. Apparently a certain J.O. Sims, fruit specialist, introduced the fruit to the UK from New Zealand in 2001. Now it can be found here and there in ice cream or yoghurt or jam, but it certainly hasn’t gone mainstream. For now, boysenberries in the UK are a specialty purchase for those in the know.