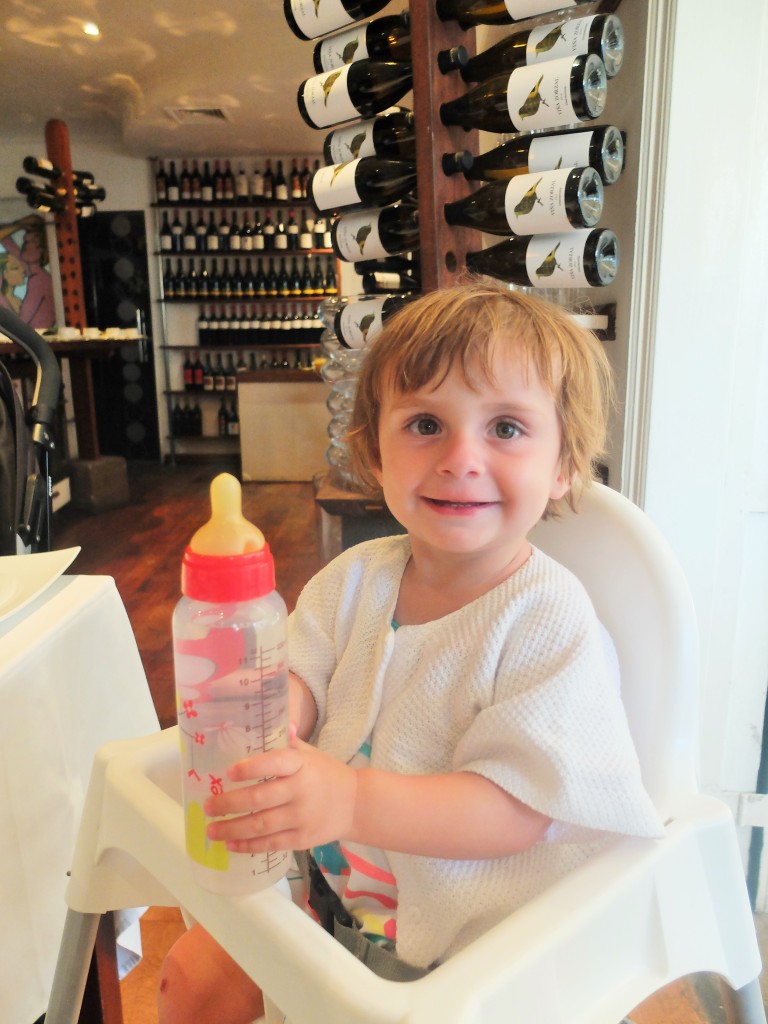 ‘I’ll take the water; they’ll have the wine.’

My husband and I travel a lot. This is one fact of our lives together that, unlike so many others, hasn’t changed since the arrival of our daughter two years ago. Much of the time it’s rewarding – the Crevette has an innate interest in new places, people and foods, just like her parents. Sometimes, however, I admit I find myself scratching my head and wondering if we’re mad to travel with our tot.

We took her to France for the first time when she was not quite two months old. I thought I was prepared, had been ticking items off the baby packing list for days. We’d rented a car and would drive to Dover, then take the ferry to Calais and continue from there. The model of car we’d booked was swapped at the last minute for a so-called equivalent, meaning the boot wasn’t nearly as large as I’d hoped. The buggy, with its various parts, wouldn’t fit in it’s entirety, so I had to choose one of the bulky components to leave behind.

As we motored closer to the coast I had one of those horrid sinking feelings. I’d left the main frame for the buggy cot at home, attached to the upright seat that the baby was still too small for. Oh, sleepless nights and stinking nappies! This was not good. My stomach somersaulted again when I realised that the canopy was also attached to the seat. Many miles behind us. In the kitchen. Where we would not be for another two weeks. So what we were left with was the buggy wheels, a cot component with nothing to attach it to the base and no shade for the babe at the height of French summer.

At least the car seat was built to fit our buggy, so that, with a parasol, would have to do.

Early on in the trip I found that fellow parents who’d advised me to take plenty of kitchen roll and plastic bags in the car, for those unforeseen baby emergencies, had indeed shared great wisdom. Following a day in Honfleur, where we’d enjoyed a first-ever restaurant lunch with our child, we decided to drive north up the Norman coast. It was on the Pont de Normandie that those plastic bags came in handy – for me, not the kid in the rear-facing car seat. The delicious skate I’d wolfed at lunch decided to make a reappearance. ‘Pull over! Pull over!’ I yelped between gulps of bile. Well, if you pull over on the Pont de Normandie, you’re going for a dip. I’d have to wait. And gulp some more.

We soon made it to a service station, but not before I’d filled a plastic bag with regurgitated ray. I remained green-gilled for the rest of the day. It wasn’t pretty. Yet, as any parent of small children knows, there is no such thing as time off when you’re ill. Puke, mop brow, soldier on, repeat. And so it goes.

On our first flight with the Crev, when she was a bonny year old, I made the mistake of wearing beige trousers. She remained dry throughout the two-hour trip, until we’d begun our descent with the fasten seat belt sign glowing bright above us. With daughter firmly fixed to my seat belt via her own infant version, I started to feel a little damp in the nether regions. The Crev turned and grinned at me. Clever girl. Yes, the nappy was full and overflowing, blessedly with nothing more than pee, but the quantity was sufficient to cause discomfort. Stuffing muslins and tissues into my groin area didn’t help much. In my desperate mind I begged the pilot to hurry up and land, fast. Then, on the ground it looked as if it were my accident, not my child’s, so extensive was the wet patch. That’s right, fellow passengers, I forgot to wear my Tena. You can stop staring now.  My advice? Wear dark-coloured trousers when travelling with small nappy-wearers. They won’t stop the accidents from happening, but at least any damp patches won’t be quite so obvious.

I can tell you various reasons why new mums should automatically grow an extra pair of arms after birth, how carry-on contents change (out goes the novel. You’ll never read it. In go the extra wipes, snacks and toys), how to amuse a small child with tourism leaflets and business cards, and why you should never buy children’s paracetamol (acetaminophen) in Austria, especially if they’re used to the fruitiness present in so many other junior medicines. The Crev’s EHIC has become the most precious card in my wallet, the States boasts the best changing cubicles I’ve come across for space, ah, the SPACE! although I’d seriously think twice before crossing the Atlantic again on a ten-hour, overbooked flight without a second adult to help with a walking toddler. What was I thinking? Never again.

Yes, travelling with a toddler changes the game, but it also gives you a new way of looking at the world – through small eyes, seeing it all for the first time. The wonder and curiosity flashing across that little face is worth all the hard work. We’ve been helped by strangers who should be canonised for kindness, seen elephants in real, full-sized, trunk-waving life (far better than the Playmobil ones at home), and every experience only makes the travel bug dig deeper into my gut. My favourite moment so far? Three, yes three, security violations in one museum, all made by my sweet-faced girl. Well done, sweetheart. You do me proud. Let’s make it four next time.