One of the most enriching aspects of being half of a Franco-Kiwi partnership is the opportunity to always have more to learn about the other culture. Monsieur definitely understands how dull his life was before meeting his wife and witnessing her Jekyll-and-Hyde behaviour during All Blacks games. Inspired by my passion for men in black, my dear, sweet husband now knows all the rules of the rugby (thank you so much, Mr Wikipedia) and tells me often that “France is gonna kick your esssssss at the World Cup”. If you don’t follow rugby, shame on you. FYI the RWC is coming up later on this year with key matches (read: when The All Blacks thrash France) already entered into all calendars and is predicted to be an interesting stage in our fledgling marriage.

Rugby aside, I’ve learned a great deal about French ways since meeting Monsieur – most of which they neglect to teach you in French studies at school or university. I make constant gaffes (or so I’m told because I also now realise how blunt the French can be when trying to re-educate hopeless antipodeans like moi, who are used to changing their cutlery with every course) and struggle with subjunctives and reflexives, but at the end of the day it’s all worth it when I discover some new (at least new to me) French tradition, like the eating of Galette des Rois on Epiphany.

For those readers who are more sinner than saint and don’t remember your Christian feast days, Epiphany celebrates the visit of the three wise men to  baby Jesus, bringing with them as offerings gold, frankincense and myrrh. In France, Epiphany is celebrated on 6 January each year. It’s a big deal. At your favourite patisserie, you must buy a Galette des Rois, a type of sweet pastry flan filled with almond paste. Somewhere in each Galette lurks a tiny ceramic feve or charm, but only the pastry chef knows where. The flan is cut into slices, then one of the party is blindfolded and will point at random people in the group to indicate who gets the next slice. This is supposed to ensure fairness because sometimes a certain bulge in the galette may show where the charm is hiding.

Once everyone has a slice of Galette des Rois, eating begins with great ripples of anticipation coursing through the air: who will find the charm? It’s not just the kids who get excited. Before long, some lucky soul will bite into something hard in the midst of the soft almond filling “C’est moi! C’est moi!” they’ll exclaim, and will now become king or queen for a day, wearing a paper crown kindly offered by the patisserie with every Galette des Rois sold. 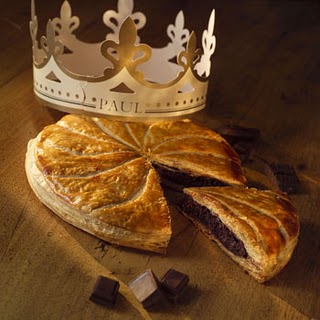 I first encountered this tradition when Monsieur’s maman invited us to an Epiphany party one year. Monsieur won the charm that time, gallantly asking me to be his queen – what an old softie.

This year, I decided to arrange an Epiphany celebration of our own – just the two of us. I tracked down a Galette des Rois at Paul, raced across town after work to collect it (there’s no decent patisserie near where I work, which is quite the cultural desert, as opposed to dessert) then dashed home to create a Frenchified evening. We made another type of galette that night – the brown savoury ones so popular in Britanny – filled with smoked salmon and salmon roe, chives and creme fraiche, or lightly smoked slivers of French bacon oozing with golden melted cheddar and an egg. I always find galettes rather filling, even though we never have more than two apiece, so we lightened our intake and ingested most of our five-a-day requirement with a big helping of salad before finally approaching the Galette des Rois.

I blindfolded Monsieur (nothing kinky), then he chose a piece for each of us. The charm was in neither, so we had to wait until the next day to try again as there was no capacity for two slices in that one evening. Monsieur won. I knew he would. He cheats. This time, his technique was to play a mind game on his poor, unsuspecting, defenceless wife (sob, sniff), so that she would allow him to have the piece with the tell-tale bulge. What was the charm this time? A small, ceramic crown, just big enough for a mouse to wear. Where is it now? In the bin. By accident. On purpose. Monsieur isn’t sentimental like me and didn’t see the point of keeping it to turn into a Christmas decoration. Luckily, Paul sold spares, and pre-empting my husband’s attempt at ‘feng shui’ (better chuck the charm), I’d already ensured that my Christmas decoration idea was taken care of. In a little round box, shaped like a golden crown, I had 5 beautiful little ceramic charms, just waiting to hang on the tree in December. 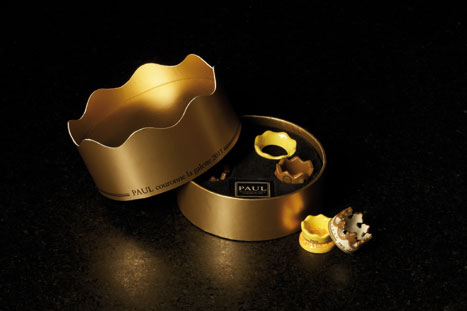 Then, on twelfth night, January 6 2012, we’ll have another Galette des Rois, just as we take the decorations down.

Once more, we’ll have French treats. Once more, Monsieur will probably win the charm. The difference will be in managing to confiscate the charm the second the crown lands on Monsieur’s head. You see, I plan to make a tradition of turning every year’s charm into a decoration, and that will require sharp eyes and quick hands, to grab the charm and ensure that Monsieur goes nowhere near the bin.