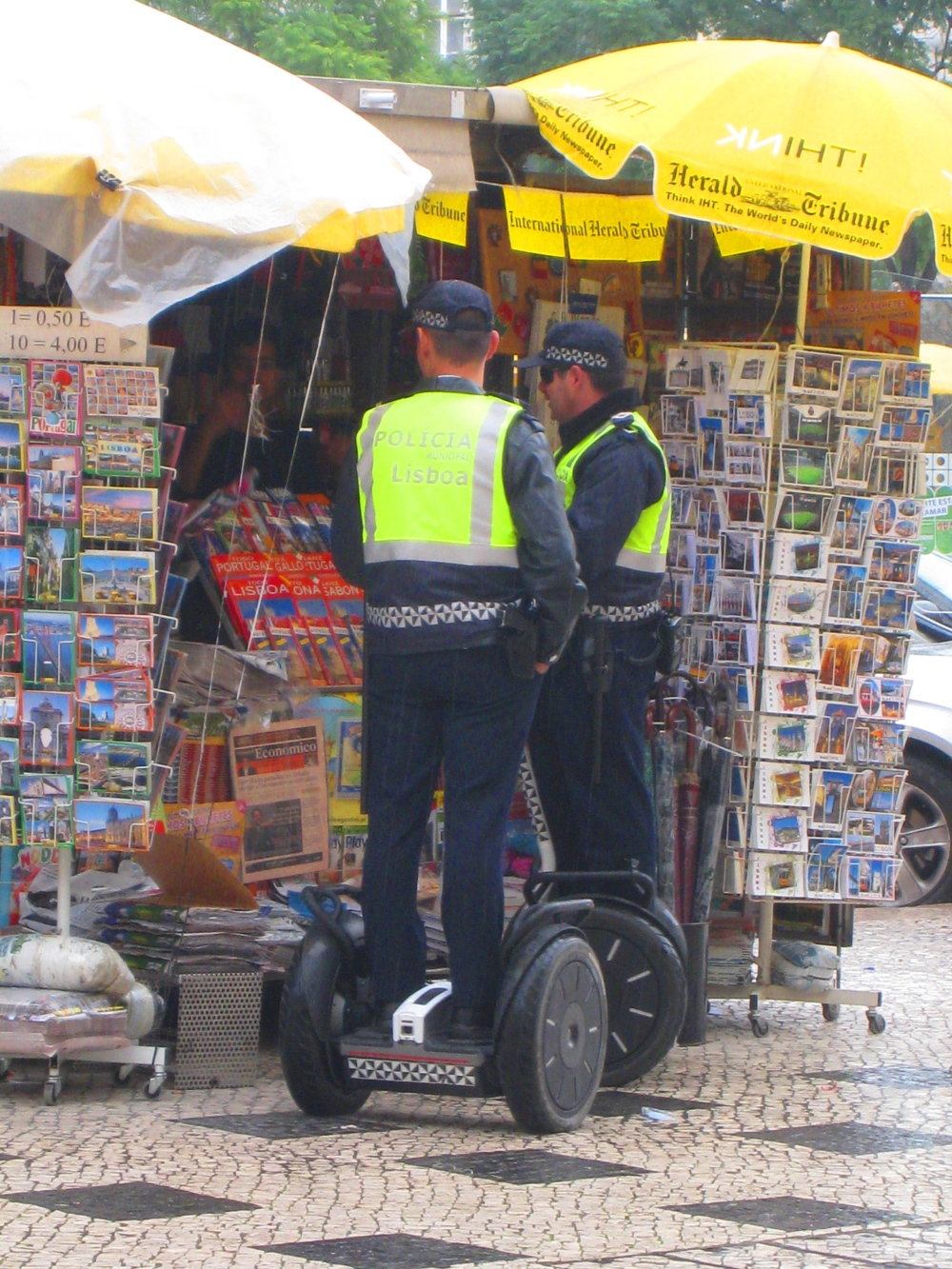 Some time back my friend, Razzbuffnik, posted a photo of people touring about Bruges on Segways. Like Razz, I don’t really understand why a Segway might be preferred to simply donning your walking shoes and getting some exercise as you explore a new place, although plenty of people seem to be keen to take a spin on these Jetson-like sets of wheels in the name of tourism, which raises the question: what do you do with the Segway when you reach a museum or other place of interest? Do phrasebooks now contain “where do I park my Segway?” or “would you mind if I leave my Segway at the door while I lunch at your establishment?” or “Are the museum’s corridors wide enough for my Segway?”, or “my Segway’s battery is running low. Do you know where I can charge it?”

It’s not just tourists who are taking to their Segways, however. Last November, Monsieur and I spied a pair of policemen using Segways to get around the Portuguese capital. Stood a good foot taller than anyone else on the street, they stopped at a newsstand, answered the public’s questions, before zooming off at a reasonable pace to the next stop on their beat. I just wondered what would happen, should they take chase to a bag-snatcher, so I visited the Segway site to see if these vehicles are fast enough to catch a thief.

The Segway site tells us that the standard setting is 12.5 miles or 20 kilometers per hour. As they put it, this is “roughly equal to a 5-minute mile, a really fast run.” So I guess a Segway-riding policeman has a reasonable chance at catching the perp.

As they’re a green alternative to other modes of inner-city transport, being charged by electrical sockets, the energy of which causes “fourteen times less greenhouse gas emissions than driving a car,” and as they don’t take up as much space as cars or scooters, the people at Segway must be hoping that interest in their product will steadily increase. A single charge will see you travelling a full 38 kilometers and 15 minutes of charge will allow you to go 1.6km. But if you weigh more than 117kilos, you can forget it. Segways can only carry so much of a person. And if you’re a lightweight at less than 45 kilos, the Segway won’t work effectively so this is an off-limits vehicle for kids and small people.

I admit I’m curious to try one out at some point, but I doubt it will be on an organised Segway tour of, say, Florence. But first I’ll have to make sure my weight doesn’t double and I up my lingo. FYI, an outing on a Segway is called a GLIDE. Sounds a bit odd, no? “I’m just going for a glide.” or “how about you glide on over for coffee?” Hmmm. Not convinced.

So before I sign glide off, have you ever been on a Segway? If so, please do tell. I’m keen to hear whether or not they have fans (apart from the Portuguese police) and why. Did you know there’s even such a thing as Segway Rally Races? Oh yes, people, it’s true. God bless Google; you learn something every day.