Only the blind could possibly miss the sight of the Golden Gate Bridge on a visit to San Francisco. It’s everywhere. Even when you’re on the wrong side of a hill or behind a building, it’s omnipresent – on postcards and tee shirts and coffee mugs and posters.

Rather than content ourselves with the varying 2-D views of this stunning landmark on calendars in gift shops, Monsieur and I decided that our honeymoon would not be complete without a couple of Golden Gate Bridge crossings. And so we traversed this world-famous suspension bridge in our giant white Smurfmobile; first to visit Muir Woods and Sausalito, and on another occasion to visit the vineyards of Napa Valley.

We were incredibly lucky with the weather while we were in San Francisco; the sky was Halcyon blue, a striking backdrop for the deep terracotta span of the Golden Gate. As the Smurfmobile neared the bridge my heart skipped a little with excitement. Then, at last, we were right there on the 2737 metre-long structure, the choppy waters of the Bay beneath us and eerie little Alcatraz a small dot to our right. 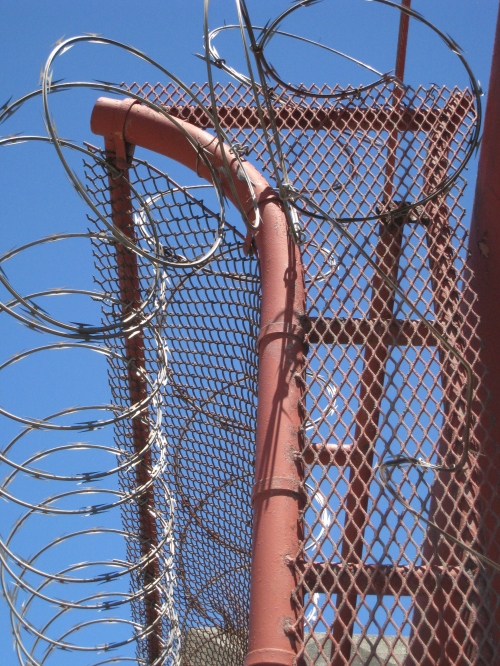 Once on the Marin County side, we pulled into a viewing area to take photos of the city skyline, The Rock and the Oakland Bridge. Then we went for a little walk part way back across the Golden Gate. Cyclists share the walkway so we had to be careful not to be squished by keen people in lycra pedalling in their lycra best. The concept of slowing down for pedestrians did not seem to feature in the mindset of this speedy bunch.

As we moved towards the centre of the bridge Monsieur and I noted with interest an emergency helpline phone. Statistics on how many people jump from the Golden Gate each year vary greatly, depending on who’s counting (local government statistics tend to be significantly lower than independent groups), but at least there are phones there if a potential jumper has a change of heart up there and decides to ask for help.

Analysis shows that the Golden Gate Bridge is the most popular place (if you can call it ‘popular’) for suicides on the planet. Jumpers rarely survive (although there is the tale of one survivor who swam to shore and drove himself to hospital) thanks to a 75 metre drop which takes 4 seconds for the average body to achieve, by which time it has gathered enough velocity to render its impact on the water like that of a mass of concrete. In the rare cases that a jumper does survive the fall, they will be injured by it or may freeze to death in the chill water. In the cases where a jumper achieves their objective, their body may never be found, thanks to the strength of the currents which may wash a body straight out to sea.

Pondering this, Monsieur and I wandered back to the car, managing (just) to survive NOT a 75 metre fall into icy water but the very real danger of the cyclists who were all riding their bikes as if they were after the yellow jersey. Fortunately, we made it back to the car park in one piece, but not thanks to them.  Cyclists of the Golden Gate Bridge: may all your tyres go flat.

Now safely ensconced in our fat, white car on a particularly sunshiny day we had plans that did not involve rushing about or running people over. Following a hectic eight months our aim was to relax and take time to smell the metaphorical roses. That in mind, we were off to experience the cycle-free tranquillity of Muir Woods. Chipmunks and redwoods, AHOY!