Hotel breakfasts too often cost a fortune for what is rarely a feast. Knowing this and preferring to experience breakfast the local way,  Monsieur and I ventured out in search of a good place to eat on our first morning in Lisbon. Walking down the Avenida da Liberdade we looked into various options. There was an interesting-looking bar/wagon with one large shutter open to allow its customers to drink their coffee on their feet, as they chatted with the baristas. Across the Avenida was a Hard Rock Café. It was already open but burgers for breakfast? Not for us. Then we came to the post office, which had a café inside it, but when we investigated further, it felt too sterile and devoid of both patrons and atmosphere, so we walked on.

A little further towards the end of the Avenida’s square, the Praça dos Restauradores with a large obelisk commemorating Portugal’s emancipation from Spain in 1640 at its centre, we found a modest little cafe with a small terrace facing the Praça. Inside, we made a comical attempt to order coffee, juice and pastries in Portuguese. (That is, comical from the perspective of the Portuguese  people around us. It was one of those awkward burning face moments for us. Portuguese is HARD.) The man serving us waited until we’d finished ruining the pronunciation of his mother tongue, before repeating our order in perfect English. He was so indulgent and polite about it that I could have kissed him. 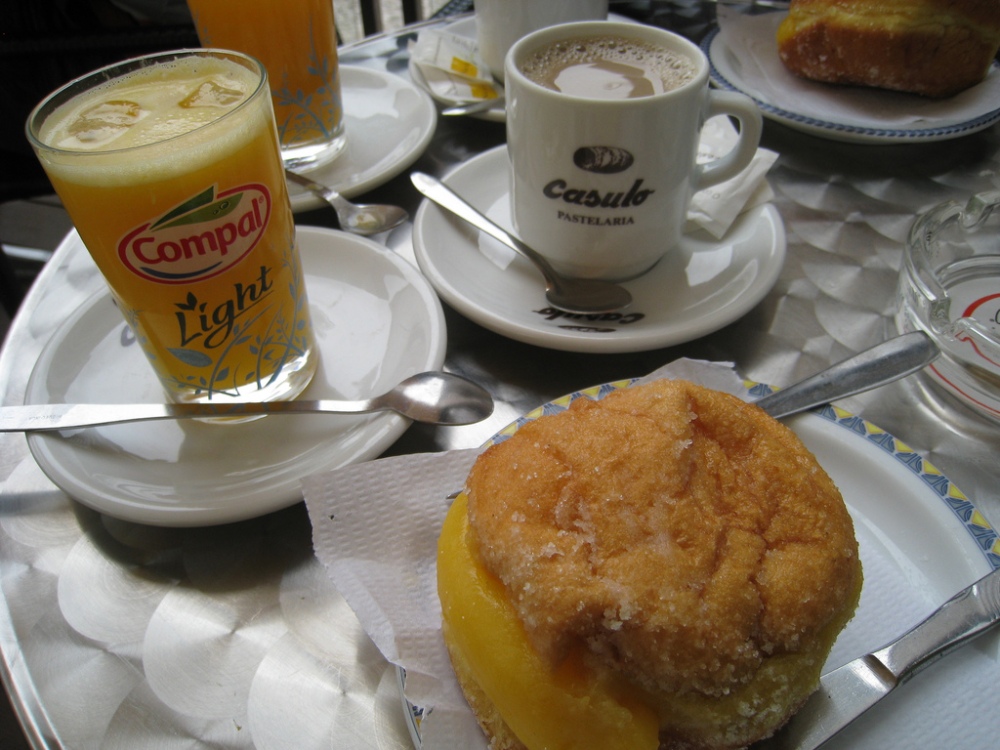 Outside it wasn’t cold but it wasn’t particularly warm and a grey sky threatened rain. For the moment, however, we could sit quite happily and enjoy our breakfast of short, syrupy coffee, just the way I like it, with freshly squeezed orange juice and one of the most evil doughnutty pastries I’ve eaten in a long, long while. Under the glass counter there had been about a dozen varieties of breakfast pastries and with the lack of language distracting me, I just pointed randomly at the same one that Monsieur had chosen. Now it was about to give me an entire week’s worth of calorie allowance at one sitting. A big puff filled with creamy, sweet custard the colour of the brightest egg yolk is what it was. This pastry was imbued with all the wickedness of forbidden fruit. (On the Forbidden Fruit Top Five it’s only second to the Sardinian pastry I scoffed in Cagliari last May – filled with light chocolate cream and chunky chocolate chips.) Believe it or not, the Forbidden Fruit pastry was not too sweet, not too dense, the shell itself was light and deflated with each satisfying bite, and the custard was just the right balance of velvet and sweetness without approaching anything sickly. Oh yes, just writing about it has brought on the dreamy daze of a sugar overdose.

And so, before I take you to see Lisbon’s salt cod merchants or to edge along dangerous castle ramparts or to ride on a banana yellow cable car, or to show  you what we had for lunch that day, perhaps you’ll share with me what rates highest on your Forbidden Fruit Top Five? Leave a comment below and let’s SALIVATE together.