Leaving Melaka was far from straightforward. There were no buses, as we’d hoped, to take us to the Low Cost Carrier Terminal (LCCT) outside KL, at least, not if we wanted to make a zillion stops en route. There wasn’t a train service for where we wanted to go and if we flew it would arrive at the wrong KL airport. In the end, the hotel staff recommended booking a car, which wasn’t that expensive, considering the value of working air con in this country, but now the car was half an hour late in picking us up. Pacing the pavement in the heat didn’t help but eventually our driver arrived so we piled in. There wasn’t a minute to lose if we were to make our flight.

Five minutes later, the driver stopped for petrol. He’d collected us with an empty tank which seems to me like going to work with only part of your brain, thinking you might just grow a new one when you need it. In this case, it wasn’t a simple case of stopping car, filling tank, paying and leaving. Oh, no. There was quite a queue in front of us, so we were there for about 15 minutes. It doesn’t seem long, but we were already 45 minutes behind schedule and we hadn’t even left Melaka yet.

At last, tanked up and raring to go, we got stuck in a traffic jam on the main road out of Melaka. Monsieur and I checked our watches with such frequency that we could probably have drawn them in great detail for anyone who’d asked. “How much longer?” we asked the driver, “With this traffic, about two hours.” Came his reply. We could be in trouble here. The hotel had told us that the journey would take an hour and a half tops and we’d already lost close to an hour of travel time, thanks to our nonchalant driver. The annoying thing about this was that we were being driven by a perfectly pleasant, well-presented, middle-aged man but this lack of interest in our airport deadline didn’t match his other attributes. At. All.

We reached the motorway at long last, immediately making up some of the lost time as well-presented driver morphed into speed-fiend. Monsieur and I settled back into our seats, the tension evaporating. A few minutes later, Driver pulls off the motorway, into a gas station. What? We can’t have run out of petrol already. The gas station was closed so before we could ask the obvious question of “What are you doing?” we’d pulled back onto the motorway and were speeding along again.

Several minutes pass and we seem to be making good progress. Until, we stop again. This time, it’s a rest stop. Driver leaves the motor running as he dashes to the conveniences, calling out that he needs to ‘wash his hands’. By this time I figured it wasn’t worth wasting any more energy on my fast-developing Transfer Anxiety. We’d either make the flight or we wouldn’t. C’est la blooming vie.

As signs to KL started appearing, the traffic became denser. This was a red rag to the bull that dwelled inside our driver. Now he had obstacles. Now he had vehicles to overtake. Now he could prove his manliness through speed. He was the fastest, the most adept driver on that road and he could out-manoevre anything that moved in his path. (In his head, at least.)

Meanwhile, I was white-knuckled with fear. We slipped between lorries (how we didn’t end up beneath them, I really couldn’t tell you). We were swooping in and out of the different lanes, sometimes driving in between two lanes. When we squeezed between two lorries, travelling side by side, it was clear that an untimely end was fast approaching. I gripped the seat and yelped involuntarily. “Please God, let us get there alive!” I begged, suddenly dying for something very, very alcoholic to calm my nerves.

Have I mentioned that Driver made it a habit NOT to use his indicators, was often driving with both hands (yes BOTH hands) OFF the wheel, using them instead to unwrap sweets? He then sucked the sweets with such an infuriating loudness that my motion-sickness moved up a notch in intensity. Saliva occasionally splattered around the front of the car, so energetic was his chomping. “You want one?” he turned around, hands off steering wheel again to offer us one of his sweets. This must be it, I thought. The End. He looked at us as if we were really odd when we refused his offer, and not a second too soon returned his gaze to the road ahead, just in time to avoid crashing into the car in front of us.

The Driver’s next trick was to use his mobile phone without a handsfree kit. Monsieur and I couldn’t say much more in Malaysian than Selamat Datang (welcome) which you couldn’t help but learn, given that the phrase appeared everywhere we went. Interestingly enough, we understood pretty well what Driver was saying on the phone. “Lah lah lah wah low cost wah?” he said, looking at every road sign with urgency. He didn’t know where the LCCT was. That had to be it. We’d definitely miss our flight.

“I never been to LCCT before,” Driver eventually admitted, “jus’ getting direction from friend.” Okay… feeling really reassured now.

We took the wrong slip road from the motorway, then had to drive for ages to get back on the motorway to the right exit. Just before we reached the airport zone, we passed the Malaysian Formula 1 Race Track at Sepang, where the Malaysian Grand Prix takes place every year. At the speed we were travelling, the irony of this was not lost on us. Driver had missed his calling, BIG time. Meanwhile, we were careening around roundabouts in the middle of the cargo area, trying to find the right way into the LCCT terminal just over the way. We could see it now but still felt far away. Driver repeatedly took the wrong entrance road but was driving so fast that we couldn’t correct him in time.

After what seemed like an interminable time racing around the terminal grounds with Sepang snorting at our F1 emulating efforts in the background, we pulled up in front of the passenger terminal. My legs were jelly as we got out of the car. Driver was visibly proud of himself for getting us here, smiling widely at us as we took our cases from the boot. He obviously didn’t understand why we looked so pale and unimpressed. Pushing the agreed number of Ringgits into his hand, we raced into the terminal, screeching to a halt in front of the Air Asia check-in counters with a mere three minutes to spare before the cut-off for our flight. Only when we’d passed through security did I stop shaking. It would seem our angels are with us on this trip, but Driver’s days are most definitely numbered. 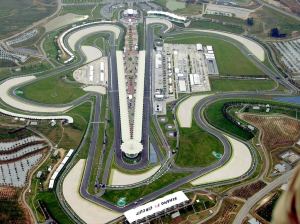