Back in London, I had been planning our Malaysian itinerary when something in the guidebook caught my eye:

“Wah Aik, 103 Jalan Kubu. Renowned for making silk shoes for bound feet. With foot binding no longer practised, the shoes are now lined up in the window as souvenirs, at a mere RM75 per pair.”

I hadn’t even left the country yet, but I already knew where to buy a present for my decorative shoe-collecting mother.

Monsieur and I had booked a car to take us to the airport just after lunch, so we had the morning to see a bit more of Melaka. Off we went down the street in search of shoes for foot-bound women. We went to the address given in the guide but the shop was boarded up. We then popped into a large shop with aisles of offerings to help one’s prayers at the Buddhist temple – fake money in bundles, cardboard platinum Amex cards, models of Mercedes cars… you name it. Anything that could possibly help you in the after-life was there,and we even got directions to Wah Aik’s new location at 56 Jalan Tokong.

Ever since childhood I’ve heard of foot-binding in China. Jung Chang’s book, Wild Swans, was the first to teach me how incredibly painful and smelly it was. Also worth reading is the novel by Lisa See, called Snow Flower and the Secret Fan , describing the life of a girl who must bind her feet to secure her future. Some say that binding women’s feet helped a woman to remain loyal to her husband because she could never run away, such was the excruciating pain of walking. Others say that tiny feet were a sign of beauty at that time, just as a 17 inch waist was desirable of Victorian women in England. In spite of knowing these basic facts, nothing could prepare me for how tiny the bound feet shoes are at Wah Aik’s. There, in a display window at the front of the shop, are a number of regular-sized slippers and shoes, below which sit rows of shoes that would better suit the feet of a large doll than a human being’s. The shoes are quite beautiful in their various colours of embroidered silk – the Emperor’s red, a soft chartreuse, turquoise, but at a mere 4 inches long, all I could think about was the crippled women who’d been subjected to such a terrible ritual. Honestly. Who comes up with these ridiculous concepts?

The shoemakers at Wah Aik’s were welcoming. They explained that not only did they sell these diminutive shoes to tourists; they also supplied them to the handful of foot-bound women still alive here in Malaysia. As we chose pairs of shoes to take home to our mothers I noticed a photocopy of a review from the Guide Routard stapled to the wall, indicating that the French must like visiting here, too. There you are, Monsieur, it wasn’t such a wild goose chase after all.

Mission accomplished, Monsieur and I now sought out the temples on Jalan Tokong, otherwise known as Temple Street. There were three to visit: Masjid Kampung Kling with a Mecca-green roof sloping like a pagoda’s but quite empty at this time of day; Sri Poyyatha Vinoyagar, with its ochre façade and Hindu statuary, but the one we really enjoyed was the Buddhist temple of Cheng Hoon, or Temple of the Merciful Cloud. 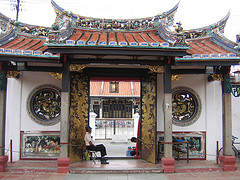 Here we were able to watch members of the local Chinese community pay their respects in a variety of ways. They burned rods of incense in clusters, held between their pressed palms as they bowed before the Goddess of Mercy, to whom the temple is dedicated, eventually leaving them to smoulder in a large, brass urn. Inside, the walls were panelled with dark wood. Offerings such as fresh flowers or fruit sat on ornate, carved altars, above which golden figures glistened in the gloom. Back outside, we watched, intrigued, as worshippers burned written prayers and fake money in a busy incinerator and could probably have wandered about there quite happily for another hour, just observing the rites of the temple’s visitors, but once again we had deadlines.

Back on Jonkers Street (also known as Jalan Hang Jebat) we wandered into The Geographer Café, just ever so slightly starving as there was practically nothing left in our tums, given that the fat-fest of the previous night hadn’t done much to fill us up and we hadn’t yet had breakfast. For hours now, we’d been existing on bottled water. In the humidity, this wasn’t really as hard as it sounds.

The Geographer is reputed to be quite a cool hang-out, but when we were there, it was hard to tell. The place, with its stacks of GEO and National Geographic magazines, all well-read with curled corners and tumbler-stained covers, felt just a bit tired, but the food was great. I took a brief break from the Asian scene, just for one meal, tucking into a delicious pasta tossed simply with olive oil, garlic and red chilli. Monsieur chose a piccante pizza as we sat in the open air, watching the world go by. Compared to the night before, it was almost disturbingly quiet. Perhaps all that line dancing had tired everyone out.

One of my (many) strangenesses is a love for tiny cars. I think the old Fiat cinquecento is a superb piece of design for urban living and, wherever I go in the world, I always find myself face-to-face with a little vehicle of some unusual appeal to me, and only me. Monsieur, being a man and French to boot, would never admit to liking little cars. He’d rather ogle a luxury sportscar, making me wonder if he’s headed for an early mid-life crisis, but reassuring in the fact that I know that at least he’s not suddenly producing an excess of oestrogen. Anyway, here is the little yellow car I fell for just before we left Melaka. It was parked just along the street from The Geographer and Monsieur had to pretend not to know me as I angled for just the right shot. I don’t desire much in this overly-materialistic world but my, how I would love a little yellow car like that.